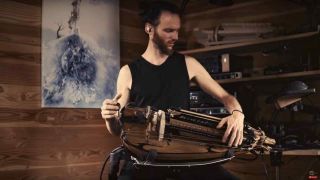 The hurdy gurdy remains a bafflingly under-used instrument in metal: think of an accordion crossed with bagpipes and guitar.

But one man is determined to reclaim it from the Finntrolls of the world. Hurdy gurdy maestro Guilhem Desq has reworked Pantera’s Cowboys From Hell for the instrument.

His version nails the groove of the original, but the addition of a noise that sounds like an angry, wheezing sheep really noses it past the Pantera version. And bonus points to Guilhem for thumping along on kick drums at the same time.

Watch the video below, and then go check out Guilhem’s website.