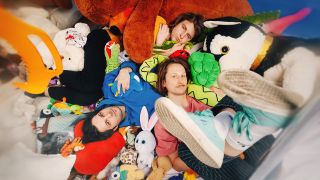 When you ask people what it is they've been missing most during lockdown, some will tell you it's their families, some their friends, but a lot of people – well, the people we've been talking to, at least – have been lamenting the loss of the places they love the most. Whether it's a local rock bar, a sticky venue or a friendly record shop, people have been craving the community spots where they can really be themselves.

The same has been true for Berlin punks Pabst. While Germany finds itself in the middle of an international furore about rogue states lifting lockdown, the capital, like a lot of the world, remains under restrictions which have seen the doors on these places slam shut.

But Berlin is in the fabric of Pabst's music. From anti-gentrification single Skyline which takes aim at the city's changing landscape, to the hundreds of nights they've spent treading the boards of its notorious dive bars, the city and its scene are embedded in their musical DNA.

So, while getting ready to unleash new album Deuce Ex Machina on June 19, Pabst join us to talk us through the places in Berlin they’re most looking forward to visiting once the world opens up again.

Tilman Kettner (bass): Urban Spree has always been a place where all the different outsider and underground scenes of Berlin could meet. It‘s always very loud in there and they have the sweetest pink and violet coloured stage lights there. For me personally it‘s probably the venue – of those which are still alive in Berlin – in which I played the most shows. Also we played our first concert there as Pabst back in the summer of 2016. Extra points for being just 15 minutes away from where I live, so I can walk home drunk at night.

Tilman Kettner: One of the best places in summer is probably Zukunft am Ostkreuz. It‘s a venue, bar, little cinema, gallery and they also brew their own beer which always tastes different. It‘s one of the few venues where you can still stay outside after a gig and nobody calls the police because it‘s too loud… The old NDW classic Goldener Reiter from Joachim Witt reminds me of this place, as we covered it together with our friends from Odd Couple at the end of our joint tour in 2019. This was probably one of the best shows we ever played.

Tore Knipping (drums): Comeback Records is probably the most typical record shop in Berlin I know so far. Really in this High Fidelity way. It’s run by two old Berlin guys who are, of course, non stop talking about the rarest version of Ring Of Fire or something like that. Its located at Hasenheide and just 100 meters away from where I was born.

Tore Knipping: Static Shock Musik is located in Bürckner Straße, Neukölln. They have a nice collection of hardcore punk and garage stuff. A song that reminds me of it is Hardly To Blame by Sheer Mag, which is from the last record I bought there.

Erik Heise (guitar/vocals): Tennis Bar is a relatively new place in the heart of Neukölln run by people from the Berlin DIY/Indie-scene and I “discovered” it pretty recently, in that I found myself ending up there a couple of times after going to shows. The bar has kind of become a stomping ground for the local music people, but, you know, not the snobby, stuck up kind. The real nice and cool folk.

Erik Heise: My second place isn’t really a place. It’s rather about the idea of “cornering”, or however you wanna call it [the concept of hanging out drinking on street corners without any real purpose]. Hanging out before some Späti with a couple bottles of the cheapest beer, talking about bullshit – or sometimes about the most profound things in life. You can technically do that still, these shops have never closed or anything. But on the other hand we haven’t done that in a long time, for obvious reasons. If I’d have to name a specific place it would be Schlesisches Tor. I know, not so specific, but there are a couple good options and, you know, you can kind of move around as well. The world is your oyster.