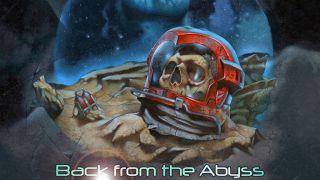 You learn to be a little cynical when a band tell you that their new album is the best they've ever done. Blather, blather, blather... if a band didn't believe that the new record was the finest of their career you'd wonder why they were releasing it. So when huge Goblin frontman Ben Ward says, “We're so proud of this album”, between large gulps of beer, you tend to shrug it off. The proof will be in the music.

And here it comes… almost! There are several false starts as a battery of technicians (well, one harassed bar owner) contemplate the machinations of the start-of-the-art sound system – or, to be more accurate, a juke box that seemingly refuses to play the requisite CD. But finally, we’re off and into Sabbath Hex, the opening track of new album Back From The Abyss and it’s… tremendous. No sign here of the Goblin sinking slowly into the mire of middle-aged musical mediocrity. They’ve cranked on the volume, gritted up the rhythms, soaked the riffs in acid and given Ward’s vocals an extra twist of sneer. This is pure metal – with all the faders in the studio superglued to maximum madness.

What Goblin have come up with is an album that treads a fine line between being a tribute to Motörhead and standing tall in its own right. Thankfully, it’s the right side of the line. In fact it’s the type of album Lemmy & Co. wanted to make on Iron Fist but just didn’t bring off. Add in touches of Sabbath, very early Maiden and AC/DC and there you have it: Back From The Abyss. The best Orange Goblin album to date, and a shoe-in to be one of the best albums of 2014! Ward’s bark has more bite than ever, Joe Hoare’s guitar pounds and snaps, and current single The Devil’s Whip races through the gears. And if you like this track then you’ll love the album.

Orange Fucking Goblin, baby! A guarantee of quality, with a capital BANG.