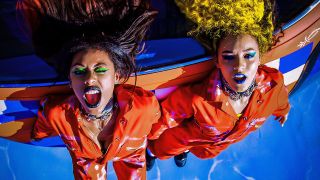 Falling somewhere between grime, metal, rock and DIY punk, it's easy to see why London-based duo Nova Twins – aka Amy Love and Georgia South – are disinclined to define themselves when it comes to their sound.

The pair's insistence on dodging labels has so far worked to their advantage: their genre-defying, new-age style means they’re making strides not just in one genre, but in three or four. High-profile fans of the band include big names such as Iggy Pop, Annie Mac and Rage Against The Machine guitarist Tom Morello, who recently declared them “the best band you’ve never heard of”. High praise indeed from one of rock’s biggest names.

Though the duo’s highly-anticipated debut album, Who Are The Girls, is set to be released later this month, the pair are already hard at work writing their second album. Both in the studio and on the stage, the duo avoid backing tracks, samples and synths – instead they stay true to their manual, DIY approach. This in-depth approach lets them set themselves “a little challenge”, as vocalist and guitarist Amy Love describes it.

Unlike many bands, Love and South’s interests don’t lie in recreating a clean, studio sound at their gigs, rather the opposite. Instead, they’re focused on recreating their raw, live sound in the studio. "We wanted to capture the energy we heard on stage and we feel like we got close with this album," they tell Louder when we catch up ahead of their album release.

Jim Abbiss – mastermind producer behind the big debut albums from Arctic Monkeys, Adele, and Kasabian – was so excited by the prospect of producing such an album that he jumped on board when the opportunity to work with the duo arose. Together, Abbiss, Love and South took time to play around with sounds from their peddle boards, finding glitches within different peddles and instruments to give tracks depth and an innovative, challenging sound.

Before they were ever thinking about their debut album, though, the duo frequented infamous London venues – Camden’s The Stables and the Amersham Arms in New Cross – playing to whoever was listening. Eventually, they started building a following around the live London scene.

The pair assert they couldn’t have started anywhere better: “Although it is quite savage at times, it was probably a great thing,” bassist South tells us. While it might have taken “resilience” to break such a tough scene, it clearly paid off.

From then on they started playing UK festivals, from 2000trees to the Great Escape, Brighton. It was here that they met Jean-Louis, a French promoter known for running Trans Musicales, a festival held once a year in Brittany, France. The festival is famous for showcasing ‘the next big thing’, with previous up-and-comers including Nirvana, Bjork, Daft Punk and Lenny Kravitz. Amy described the festival as nothing she had ever seen before: “It’s these huge massive warehouses in this industrial estate, four thousand capacity for each venue where there is so much world music," she told us.

“Jean-Louis invited us down and we didn’t realise how big it was going to be. When we arrived, there was a curtain behind the stage where you could see [into the crowd], so our first gig out in France ended up being at a 4000 capacity venue.”

From then on, the girls played all around the world, travelling from France, to New York, to Kazakhstan, playing a range of different venues to completely different audiences and supporting everyone from Prophets Of Rage to Little Simz. Fitting, considering their defiant approach to musical categorisation.

The pair are about to set off on their most important and extensive tour yet in support of their debut. But they don’t seem the slightest bit scared, which could be down to their tight bond and lifelong friendship. As South describes it: “We’re always together – it’s like a holiday instead of a tour.”

They also believe their friendship is the foundation of their music and success. “We move together and think the same way together." says South. "I think that’s the formula to our music. It’s got its own little quirks to it because our personalities work so well together, it’s really important.”

The duo’s DIY approach – their music consists of vocals, bass and guitar, as well as a drummer who joins them for live gigs – extends further than just their music. The pair make and direct their own music videos, as well as making their own sets and designing and creating their own clothes. It may seem a lot, but it’s clear how much they enjoy it.

Georgia claims even if they get more people in their team, they’ll always be a part of the behind the scenes process within the band. “It just might not be us always hand sewing each thing,” laughs South.

Looking into the future, the duo seem interested in progressing their music further and trying out new things in their sound. “We are where we are now,” Love says. “I think album four might end up with a synth, who knows.”

Their new label 333 Wreckords Crew, founded by Fever 333's Jason Butler, is something the duo are sincerely excited to be a part of. Instead of a standard label, it’s defined as an ‘artist-orientated collective’. “You don’t always feel backed because everyone is struggling to get to one place or another, so it’s hard for artists to look out for each other,” says Love. “But Jason’s been like, ‘we have to look out for each other’ and we totally agree with that.”

The duo are aware they're outnumbered in the rock industry – not only are they women, but women of colour – and that the odds are stacked against them in such a male-dominated industry. They experienced it first-hand at some of the festivals they played in 2019. During rock and metal festival Download, for example, the girls noticed they were two of seven women on the line up. “We feel like we need to represent all the women and people of colour [at the festival]” says South. “When we walk around, we cannot see our reflection.”

Instead of seeing it as a downside, the girls see it as a challenge. In the next decade, they want to further promote the movement of a diverse audience at rock shows. “We want to change it up and try and make it more open, so more people can be involved in heavy music.

"Because everyone has an influence on the culture – rock and punk – but it doesn’t necessarily let everyone in. So we’re trying to do that.”

Who Are The Girls? is out on February 28 via 333 Wreckords. Nova Twins head out on tour in March, find full tour dates below.