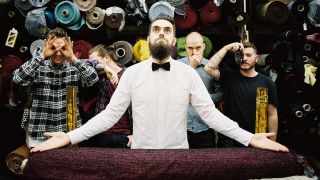 How did you get into music? Did something catch your eye when you were flicking through your parents’ vinyl collection? Or did you do some investigating after seeing a band T-shirt at school? Everyone has a different story to tell. Take Zoax frontman Adam Carroll, for example, whose entry point into music was largely down to a Belgian comic book franchise.

“The first album I ever bought was [1997’s] The Smurfs Go Pop! Again,” laughs Adam. “When these questions come up, people always answer with something like The Shape Of Punk To Come. Of course, I got into those albums evenutally, but I knew nothing about music at the age of seven or eight, so I was on board with The Smurfs.”

He soon forgot about The Smurfs and discovered the likes of Metallica, Biffy Clyro and Counting Crows and performed vocals including Cork quartet Time Is A Thief. Meanwhile, on the other side of the Irish Sea, Zoax – Douglas Wotherspoon (guitar), Morgan Sinclair (guitar) Joe Copcutt (bass) and Jonathan Rogers (drums) – were searching for a vocalist to complete their band.

After seeing him front Time Is A Thief, Carroll was invited to join the London-based band and they wasted little time in releasing their debut EP, XIII. They’ve recently followed that up with Is Everybody Listening? and despite the band’s short tenure, they’ve evolved greatly in the time between the two releases.

“The music for first EP was done without me, so I went straight into the studio and did my vocals,” explains Adam. “Some of the guys in the band hadn’t heard what I came up with until the day I actually finished. So, going into the studio for this EP, we had ideas and were writing in the studio and thought how different it was to the first release. It still has the same ingredients, but we knew 90% of people would be like, ‘What the hell’s happening to the lads?’”

Is Everybody Listening? sees the quintet take their post-hardcore sound into bold new territories. The angst is juxtaposed with a sense of swagger and complements Carroll’s stage presence; a bearded man who graces the stage with a wild-eyed fury and is unafraid to get into the mêlée.

“I actually have no idea where this [stage persona] comes from,” says the vocalist. “I’ve been in bands for 14 years, but [it’s different] in Zoax. It’s straight-up weird when I go on stage and there’s a crowd of people staring at my face. We just love the energy of the music and I just want to get everyone involved. I love getting in people’s faces – in the most playful way, of course.”

Following the release of their new EP, 2015 is set to be an exciting year for Zoax. Fans eager for their full-length debut will have to be patient, thought, as the five-piece are in no rush to release an album to meet demand.

“A debut album is one of the most important things a band can do,” reasons the singer. “We’re taking baby steps because we want to release something amazing.”

Is Everybody Listening? is out now. Zoax are on tour throughout March and April. More information is on their Facebook page.