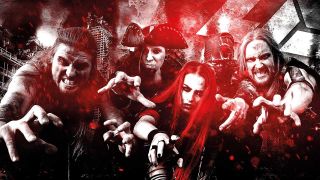 For Fans Of: Sabaton, Epica, Nightwish

If you've ever wondered what would happen if Hans Zimmer went through an Epica phase, Follow The Cipher are your answer. Calculating symphonic power metal meets the towering soundtracks of timeless cinema fantasies at the hands of this Swedish five-piece. Starting life as a solo project for guitarist and main songwriter Ken Kängström, Follow The Cipher were forged in the power metal furnaces of Falun, the city that spawned Sabaton and Twilight Force.

“Falun is a place of wonders because all the bands in the city are friends and everyone helps each other out, whether they’re the most famous guys or they’ve just started out,” explains Ken. “We all go to the pub together!”

A friendship with Sabaton frontman Joakim Brodén led to Ken joining the writing team for their sixth album, Carolus Rex, and contributing to the writing of the fan favourite and setlist mainstay track of the same name. Follow The Cipher have now covered it on their self-titled debut album.

“I lived with Joakim for two years and they invited me to be a sound engineer for Sabaton when they released Primo Victoria. After a while, it all became too much so I had to quit and move back home. Years later, they asked me back to write for them and see where it led, and it led to Carolus Rex.”

Follow The Cipher became less of a daydream and more a challenging production reality when vocalist Linda Toni Grahn tried out for the band, laying her vocals on Ken’s riffs.

“I auditioned five people for the vocals and the last person to come in was Linda,” Ken recalls. “Everyone else took four hours to audition but she took 15 minutes. She’s the nicest person I’ve ever met in my life and she speaks so softly, but once she takes to the microphone, she’s the devil herself.”

Before long, the band found themselves playing their first gig at the Czech Republic festival Masters Of Rock, and soon after the success of their maiden voyage, Nuclear Blast snapped them up at their second show which was, fittingly, Sabaton Open Air 2017.

“We had such a great show that day, the response was awesome and I saw Markus Staiger from Nuclear Blast headbanging in the crowd,” Ken recalls. “We met him afterwards at the bar and he said he’d been keeping an eye on us for years. We were thrilled but also nervous as everything was new territory for us; we’d never made any albums before and our previous bands never got this far.”

Follow The Cipher’s debut album centres around the concept of a ‘cipher’, an enigmatic force whose limits even the band are unsure of.

“The cipher is meant to be a mysterious metaphor for following a code,” explains Ken. “This first album is taken from a post-apocalyptic approach, so the cipher in this sense is about the mystery of the future. We have decided to keep the concept open so nobody knows what the cipher will mean for us in the next album.”

Four years in the making, Follow The Cipher was no mean feat as line-up changes and seemingly never-ending production work almost saw the end of the band’s career before it started. In pursuit of a unique atmospheric sound, Ken and co have established ‘cipher metal’, a genre of their own to avoid being placed in a box themselves. What more could they possibly do?

“This album truly represents a dream come true for us,” he replies. “We would like to send that message out to people who are listening to us to pick up their instruments and try to reach their dreams, too.

Follow The Cipher is out now and available to buy from Amazon.