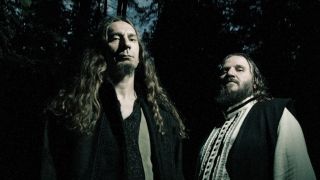 The lake, even in the fading light, is azure blue. Located deep within the Transylvanian mountains, at the end of a long, river-hugging forest path that leads you to a diminutive if still mesmerizing waterfall crashing through foliage and over a natural stepping-stone construction of rocks, its stillness is almost a rebuke to the constant activity just a few meters downstream.

This is a lake known in Romanian as ‘tau’: very small but deceptively deep, and as Negură Bunget mainman and drummer Negru explains, a source of various myths, where thunder is brewed and dragons slumber far below. You just have to know where to look./o:p

A constantly evolving and, lineup-wise, often revolving entity, Negură Bunget have been exploring the lacunae of the Transylvanian landscape and lore for two decades. Initially the pooled inspiration of two creative minds, Negru and vocalist Hupogrammos (whose acrimonious departure in 2009 has long been documented in these pages), the journey from their raw black metal roots through the sublime, majestic invocation of 2006’s Om and cinematic sweep of 2010’s Vîrstele Pămîntului has been one of ever-deepening roots and broadening of scope.

Traversing realms between the earthy and the ethereal, and taking traditional Romanian instruments into exhilarating and rarified new territories, each highly conceptual album has nevertheless placed a stethoscope on rich and subterranean currents of Transylvanian identity, the act of bringing them to light a dazzling feat of magic in its own right.

That it’s taken five years for Negură Bunget to release Vîrstele…’s follow-up is a result of both yet another internal adjustment, with Negru assembling an entirely new collection of musicians, and a measure of the undertaking they’ve just embarked on. Tău is the first part of a projected trilogy, as Negru puts it, “a personal vision of what Transylvania means,” focusing respectively on the region’s natural elements, local traditions and spiritual nature, and extending beyond the albums into various other media, that looks set to become the band’s definitive statement about themselves and their homeland.

It would be an ambitious enough project without an entirely new lineup, but for Negru, this doesn’t mark a major shift so much as another permutation to channel the continuity that underlines the band.

“Negură Bunget has always been, musically, a reflection of the concepts,” Negru explains. “So even though there were new people in the band, they all had to somehow work with that concept. And even if they brought in some new personal and musical elements, at the same time there was a merger between the two things and that also helped things go faster, because they weren’t starting something completely new. Everybody pretty much knew what Negură stands for and they were familiar with the band. In a way there was a continuity, but at the same time there are, of course, new personal influences that we always try to exploit, because every Negură Bunget album is a collective work, so everybody brings his own stuff.”

Although the traditional instruments – dulcimer, various horns, the near-iconic hammered wooden block to name but a few – and fierce grandeur that have always been Negură Bunget’s calling card are still there, at first listen Tău does sound like a departure: less steeped in atmosphere and venturing down new musical avenues, not least the eyebrow-raising if thoroughly enjoyable decentred oompah hoedown that barrels throughout Împodobeala Timpului’s imperious chant. But with each of the eight tracks aligned to a specific place on the Transylvanian landscape, Negru is in agreement that Tău’s concept has determined the shift in sound.

“We’ve dealt with those elements in the past,” he says, “but it was a mixture between local elements and more universal ones that clicked together in certain ways. This time it’s more present, more focused on details. We tried to focus on the local elements and a more detailed approach with different layers. We didn’t try to present what people expect when you talk about Transylvania, but the way we see this, and it should be more honest and direct because we’re from here and we have always been inspired by it. Although we speak about the local nature on this album, it’s not the same as we did in the past; it’s different because it’s a very complex thing.”

If there’s any one band with a comparable approach to their local folklore, it’s Norway’s Wardruna, whose own ongoing trilogy has a knack for zeroing in on specific details – in their case, individual runes – and making them resonate, mining their sources for webs of personal connections to chart. For all the intensity and knowledge such a perspective demands, it’s an act of interpretation that doesn’t need to rely on any spurious, self-regarding notion of authenticity.

“I think it is similar,” says Negru, “but for us it’s different places around here that we felt connected to. When you see a certain place it does create a personal connection and you understand it differently than it is in reality. Usually when you have a strong connection with a place it has lots of other aspects behind it. For instance, on the first song, Nămetenie, there’s a place in the Făgăras mountains that translates as The Window Of The Dragons, on the crest of the mountain. I somehow see it as two worlds, like on one side it’s a world that can be sunny and warm and on the other side stormy. It’s like the wall between the present world and the other one is the world of the legends, so you can pass from the concrete to the mythical, from the present to the legends and tradition.

“It’s a small place – some people don’t notice it – but I felt a special connection with that place, and if you look into those traditions, and why it’s called Window Of The Dragons, you can ask: what are the dragons, how are they present in the local folklore and the legends? It opens numerous perspectives that we explored in different ways, and not completely, because we could do a whole album just about that place. It’s detailed enough, but there is a lot more beyond what we do.”/o:p

With such a vast and encompassing project as this, and for a region so prone to mythologising, does Negru feel as though he’s reaching towards a unified idea of what Transylvania is, or is the trilogy designed to be open-ended, to account for different narratives and interpretations? Can truth be found in the contradictions?

“Sometimes competing narratives can offer a complementary vision,” Negru responds. “I don’t try to say this is one thing; it’s more like a lot of different things that somehow you can see all together. Maybe you cannot see it, just understand some parts of it. I myself don’t say I can understand completely what this means. I just present some parts and some things that I feel related to. I think they can only hint at what the whole is.”

That need to interact with your environment, to allow for ambiguity, and still forge meaningful and expansive personal connections seems like an approach that suggests a means of relating to the fragmented nature of contemporary culture as much as it does with the past.

“I think it’s particular to our present times,” Negru agrees, “because things are getting more and more intense, faster and people somehow get burned faster. Now it’s even more important to realise that you can have other perspectives, another consciousness even. But again, it’s a personal thing. I’m inspired by a lot of details that very few people know and those are the kinds of things that fascinate me, that I try to explore. I know some of them are hard to understand, even for the local people, because you have to study a lot to know where to look and then to discover things that very few people know. That’s why it’s so fascinating for me, because over the years I’ve just found new elements all the time. It goes deeper and deeper.”

TĂU IS OUT NOW VIA LUPUS LOUNGE

Formed by Negură co-founder Hupogrammos, and with former Negură multi-instrumentalist Sol Faur in the ranks, Dordeduh (a play on the Romanian for ‘longing for the spirit’) have put out just one album, 2012’s Dar De Duh, since 2009’s schism, and one that carries his blackened flame into simultaneously starker and more progressive territories, using similar ethnic instrumentation to still potent ends.

Having briefly shared vocalist Corb and ex-guitarist Spin with Negură on the Vîrstele Pămîntului album, these fellow Timisoara natives have just completed their own conceptual album trilogy with the release of Stăpîn Peste Stăpîni. With a slightly bonkers take on symphonic black metal, this five-piece go one further than Negură’s indigenous clobber by rocking up in chainmail, leather and a battleaxe for good measure.