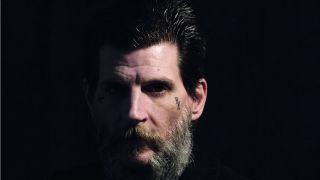 Earth’s guitarist on Robert Fripp and how King Crimson still inspire the post-rockers.

“When I got a guitar in high school, the first chords I ever learned were from King Crimson.

I bought it from a guy named Griff, a huge proghead who turned me onto the band. So Robert Fripp is pretty big for me. The album that introduced me to him was In The Court Of The Crimson King, which coincided with me experimenting with psychedelics in high school. When I started Earth, it was my third attempt at a band, but basically I sat down to play because Fripp did. The Crimson live album, Earthbound [1972], was an influence on the name. The song titles I come up with for Earth have been heavily influenced by the long titles on Crimson records.

“I’d sit and read the booklet that came with A Young Person’s Guide to King Crimson [1976], which was a day-by-day account of the band from ’69 to ’74. Starless And Bible Black was a huge album for me, especially the title song and the final track, Fracture. I’d never heard anything like that before. And the song Red, from the album of the same name, has one of the best riffs ever. It was cool to hear something that was really heavy, both musically and conceptually. Earth started because I had a concept and King Crimson were very much like that too. There was more than just music going on.

“If I had to narrow it down to specifics with Fripp, there’s that single-note sustain thing that he does. In fact, on the new Earth album [Primitive And Deadly] there’s one song where Randall [Dunn, arranger/producer] joked with me about giving it the Fripp by holding this one note for more or less the whole track. A lot of the time I’ve approached guitar as having more of a support role within the band, a texture to sit alongside other instrumentation.

“I don’t think Fripp would’ve happened in America. That Giles, Giles & Fripp album [_The Cheerful _Insanity of Giles Giles & Fripp, 1968] would never have taken off in the States. Like Crimson, especially in the early days, it was just so British. And I mean that in a good way!”

_Earth’s Primitive And Deadly is out now via Southern Lord. _