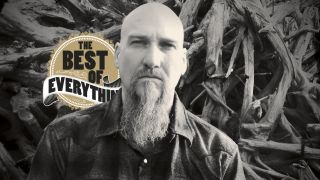 Let me begin by stating that it is impossible to fully encompass the influence of British music on myself, and my brothers in Neurosis with only 10 bands. It resonates too deeply, defies too many genres, and covers a vast sonic territory. Regretfully, I had to leave out some incredibly important artists such as the relentless pounding slogans and tape collage of Crass, the balls out rock power of Deep Purple (Jon Lord’s distorted organ!), the hypnotic fuzz grooves of Loop, the heavy heady drone harmonics of Skullflower, the groundbreaking mechanised crush of Godflesh, the many aspects of Zeppelin…

When I think of music from that part of the world, music that reflects the land itself and what it has meant to me, my warped mind instantly conjures an abstract and fluid mythological collage: ancient Celtic ceremonies with horns and skin drums evolving into pipes and drums preparing for battle or mourning the dead, while Sandy Denny sings legends of the past and bittersweet ballads with Bert Jansch and Richard Thompson. Hawkwind and Skullflower lead the frenzied shamanistic rites among the stones. Amebix and Motörhead wave their warrior banners for the call to arms, just before we all disappear on the wind to the sound of Flying Saucer Attack. Once we are returned to solid footing in a crop circle, we drink and dance it all away with the Pogues, New Model Army, and the Levellers. It all makes perfect sense to me, but that’s my personal sonic rabbit hole, and I really need to focus here. More specifically, I need to focus on the bands from that island have been largely responsible for inspiring Neurosis to find its own unique sound…

**BLACK SABBATH **Does it really need to be said? Most of us wouldn’t be here without those first few albums. The tritone, the devil’s note, the endless riffs from the master. The feelings of impending doom in the modern world of war and post industrial collapse, all perfectly expressed in a dark haze of the supernatural.

PINK FLOYD Live At Pompeii to be precise. This, in my humble opinion, is the cornerstone of their influence on Neurosis. While not an album, the performances of this pre Dark Side era blow the album versions out of the water. The slow building psych space of Echoes, the blood curdling screams on Careful with That Axe, Eugene, One of These Days I’m Going to Cut You into Little Pieces, the cosmic journey of Set the Controls for the Heart of the Sun… You have no idea how many times I have watched this.

DISCHARGE The early EPs Why? and Hear Nothing, See Nothing, Say Nothing were one of my gateways to punk. The massive impenetrable wall of guitars grinding away on a relentless thundering rhythm section was mind expanding. “Like an enormous door slamming in the depths of hell.”

THROBBING GRISTLE I was very young when I heard Sabbath for the first time, and even though I was enraptured with the sound and knew it was for me, the dark paranormal energy was a bit scary for a young lad. I didn’t know shit. Years later, tuning in to a late night program on my local cutting edge community radio station, for the first time, I would be truly terrified by music and sound. Throbbing Gristle. Disturbing, unsettling… this is the sound of confronting society’s taboos while its façade fades into an industrial wasteland.

JOY DIVISION Sparse and moody, they were the perfect soundtrack for urban isolation in a jungle of concrete and steel in the late ‘70s. That driving bass sound that must have inspired thousands of goth and punk bands since, locked in with the primitive drums, accentuated by the ice pick twang guitar, all supporting that voice… that voice. New Dawn Fades, Day of the Lords and Atmosphere are my favourites.

AMEBIX Crawling out of the squatter anarcho punk movement, these guys added another element entirely. The spiritual element. Morphing throughout their history from a noisy primitive post punk noise somewhere akin to Killing Joke via Crass, into a monolithic crusty pagan biker metal juggernaut. Again like Motörhead, Discharge, and Joy Division, we have that driving bass, and some more gothic, haunting simple synthesisers – not to mention the fact that they were not afraid to have a huge, albeit unique guitar tone. Even though their motto says, ‘No Gods, No masters’, I always suspected ancient pagan gods of the land of Britain itself had some influence here.

MOTÖRHEAD This music is in my blood almost like nothing else. The in your face, “fuck you if you don’t like it”, honesty and visceral gut level rock and roll leveling of everything in its path resonates. It is just part of my musical DNA. I love it all, everything from the earliest recordings of No Parole and the first album up through Orgasmatron are just programmed into my psyche with Overkill being my desert island Motörhead record: Stay Clean, No Class and Metropolis… come on!

HAWKWIND I realise that for some of my punk friends in England, that Hawkwind may be the annoying older generation of hippies that drove you up a wall in your punk youth, much like the Grateful Dead is to us in the States. But I think there is more going on here. This is not feel good music, this is the dark trip. From In Search of Space to Space Ritual, the albums are the perfect combination of visceral proto-punk driving power surrounded by a swirling psychedelic cosmic nightmare. To my young Yankee imagination from across the ocean, the images of this sound emanating in free festivals of Stonehenge stirred up the Celtic blood. Energy like that is why the Romans had to leave Britain.

**RUDIMENTARY PENI **Menacing and uncomfortable. Somehow merging the anarcho punk energy of the time with deathrock. Death Church was an incredibly important album for us. Intense energy driving this swirling mass of anger, anguish, and chaos. Track down a vinyl copy, put it on, and dive into the album art! At one moment, they even evolved way past any of us at the time with Cacophony, probably the strangest and most ambitious punk concept album ever.

SUBHUMANS From The Cradle To The Grave is in many ways the punk rock version of The Wall. An epic rant rejecting socialisation and conformity in the modern world. The music was amazingly adventurous; the title track is an entire LP side traversing a ton of sonic territory and song structures with repeating themes and somehow unifying into one mind bending cohesive piece. “From birth to school to work to death, from the cradle to the grave…”

Steve Von Till’s solo album A Life Unto Itself is out now via Neurot Recordings. He plays London’s St. Pancras Old Church on June 29 with support from Markers. For tickets, click here.