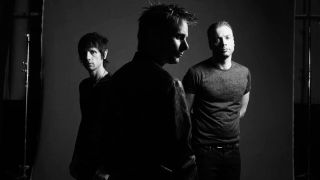 On June 8, Muse will release their seventh studio album ‘Drones’. Set to be the best-selling rock album of 2015, the 12-track collection was recorded at Bryan Adams’ Warehouse Studios in Vancouver, Canada and co-produced by the band and Robert ‘Mutt’ Lange, the veteran producer best known for his work with AC/DC and Def Leppard.

The band’s first fully-fledged concept album, according to frontman Matt Bellamy, the narrative of the album is based around the idea that “the world is run by Drones utilising Drones to turn us all into Drones.” Across its 12 tracks, he further explains, Drones, “explores the journey of a human from their abandonment and loss of hope, to their indoctrination by the system to be a human drone, to their eventual defection from their oppressors.”

**DEAD INSIDE **The album’s first single, and opening track, the robotically funky, understated Dead Inside picks through the embers of a broken relationship, drawing unavoidable comparisons with the end of Matt Bellamy’s relationship with Hollywood actress Kate Hudson. “On the outside I’m the greatest guy, but now I’m dead inside,” sings Bellamy at the song’s close. The protagonist’s journey into the heart of darkness starts here…

**[DRILL SERGEANT] **A 21 second intro to Psycho. Less a spoken word track, than a shouted word track, as an uncompromising military officer begins our hero’s indoctrination.

**PSYCHO **Based around a swaggering, bouncing riff the trio have been knocking around in soundchecks for 16 years, Psycho is the most back-to-basics, straight-ahead Muse track in years, a throwback to their breakthrough album Origin Of Symmetry. The lyrics, truthfully, are kinda terrible – a clichéd depiction of an army recruit being brutalised by the aforementioned drill sergeant that will be over-familiar to anyone who’s ever watched Full Metal Jacket: when the chorus screams “I’m going to make you a fucking psycho” you know this isn’t Muse at their most subtle.

**MERCY **A kissing cousin of Black Holes And Revelations’ mega-ballad Starlight, Mercy is one of those slow-burning, twinkling Muse anthems which will sound absolutely huge when unleashed in stadiums. Bellamy’s lyrics concern “men in cloaks” who’re apparently trying to “devour [his] soul.” Never pleasant, that.

**REAPERS **The point at which the idea of Muse headlining Download 2015 starts to makes complete sense. Kicking off with a flashy riff reminiscent of Van Halen’s Hot For Teacher, Reapers bursts into life with one of those bastardised Rage Against The Machine-style fretboard runs that Matt Bellamy has made his stock-in-trade, before sliding into a distorted ‘Killed by drones’ chorus. A meditation upon modern warfare and killing technology, the lyrics are unlikely to trouble Noam Chomsky, as Bellamy sings “You’ve got the CIA babe, but all you’ve done is brutalise.” Listen up sheeple!

**THE HANDLER **Another heavyweight, moody and intense number, with shades of Muse classics Stockholm Syndrome and Knights Of Cydonia when Bellamy finally gets around to unleashing the song’s pulse-quickening riff. This is the point in the narrative at which the central character begins to rebel against the forces which have oppressed him, and makes a bid for independence. “I won’t let you control my feelings anymore,” insists Bellamy. “I will no longer do as I’m told. I am no longer free to walk alone. Let me go, let me be!”

**[JFK] **A spoken word interlude, lifted from President John F Kennedy’s April 27, 1961 speech to the American Newspaper Publishers Association at the Waldorf Astoria hotel in New York. The text runs: “We are opposed around the world by a monolithic and ruthless conspiracy that relies primarily on covert means for expanding its sphere of influence–on infiltration instead of invasion, on subversion instead of elections, on intimidation instead of free choice, on guerrillas by night instead of armies by day…” In the post-Edward Snowden world, with governments admitting to spying upon their own citizens, the point being made is rather plain.

**DEFECTOR **With its stacked up vocal harmonies and layered guitars, the rather forgettable Defector has an obvious Queen influence: as it proceeds from its defiant opening (“I am free from your inciting, You can’t brainwash me”) to a spoken word climax it also recalls Def Leppard’s Gods Of War from the Mutt Lange-helmed Hysteria album. One imagines that the Teignmouth trio would be less impressed with this comparison.

**REVOLT **The album’s most obvious single, boasting its most towering chorus, Revolt recalls the euphoric Resistance from 2009’s The Resistance album. Think Manic Street Preachers-meets-Queen, a stirring, empowering call-to-arms: “You’ve got strength! You’ve got soul! You’ve felt pain! You’ve felt love! YOU CAN REVOLT!” You get the idea.

**AFTERMATH **The album’s ‘Let me see your phones in the air Download!’ stadium-sized ballad, Aftermath starts off as an amalgam of U2’s One and Dire Straits’ Brothers In Arms with weeping strings and atmospheric Edge guitars. Intentionally or not, the song’s widescreen chorus melody has echoes of the “stand beside her, and guide her” refrain from God Bless America. Well, that and Rod Stewart’s 1975 hit Sailing, which would be a rather less subversive steal.

THE GLOBALIST Described by Matt Bellamy as a sequel of sorts to Origin Of Symmetry track Citizen Erased, The Globalist is the point on Drones where Muse abandon notions of ‘stripping down’ their sound, and go over-the-top in spectacular fashion. A 10-minute monster, The Globalist opens up as a ballad with Ennio Morricone-style whistling and shimmering Deer Hunter chords then shifts gears into a full-tilt metal riff that wouldn’t disgrace Iron Maiden before settling down into a grand, classical piano finale. “You were never truly loved,” wails Bellamy. “You have only been betrayed. You were never truly nurtured, by churches or the State.” Epic, overblown, and very, very Muse.

**DRONES **The album closer, a spacy, celestial hymn of sorts, with layer upon layer upon layer of overlapping vocals, like Spiritualised at their most trippy, over-powering and experimental. The closing lyrics – “My mother, my father, my sister and my brother, my son and my daughter, killed by drones” – don’t exactly add up to a happy Hollywood ending.

Drones will be released on June 5 through Warner Brothers. The band will play Download festival on June 13.