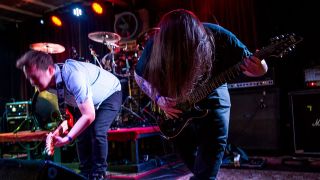 Forming in 2013, UK slam act Monasteries have toured relentlessly across Europe and are gearing towards releasing their new single The Amygdala Chorus on February 21.

Having been plugged as the UK's equivalent to The Tony Danza Tapdance Extravaganza, the band merge erratic deathcore with math-infused technical guitar riffage.

With a well-earned following in the UK underground scene, the quintet are no stranger to a brutal breakdown, so we caught up with the guys to hear their top metal breakdowns ever.

Sam (Bass): "I came across this band a while ago through a late night rabbit hole session on YouTube and I haven't stopped listening to them since then, especially their latest album, Savages. But Realism from When X Met Y is one of my favourite breakdowns of all time. I love how it comes in extremely hard and fast, then it slows down to half time, with Sylvian's vocals coming in harshly."

Sam (Bass): "I've been listening to Gojira since I was a kid in school and they were definitely one of the bands that pointed me towards heavier music. After hearing the breakdown in Flying Whales at 6:20, I've been trying to find something heavier but I've just not been able to find anything like it. It sounds just as good now as it did years ago."

Josh (Vocals): "The breakdown at 3:00 just fits the whole track perfectly and it stands out just being the heaviest song off that record. Tom's vocal performance is just mental. I found Lorna Shore probably a year after Maleficium was released and the band caught my eye with another tracked called Godmaker.

"I instantly fell in love with how they combined slow and heavy breakdowns with death metal riffs and over the coming years I just fell even more in love with the band. I have such high hopes for their latest release Immortal and how it’ll be album of the year for me already."

Josh (Vocals): "From start to finish this track just gets heavier and heavier! The breakdown at 0:50 is still probably my favourite, with Adam Warren just pulling off a unique and inspiring range with how just low he can get. I discovered the band back in high school when I was around 13/14 just scrolling through bands I may like because I was heavily into Suicide Silence at the time.

"Oceano played a big part, being an influence to me later on because they’re just a bone-crushing band that can literally make anything sound good. My favourite album by them still is Ascendents just because the musical performance from each member is unreal and no album should sound as heavy as that."

Dying Fetus - In The Trenches

Aaron (Guitar): It ain't your usual down tempo breakdown but it still goes just as hard. It's got everything: ridiculously fast double bass, the most ignorant lyrics, that good hard groove, the guttural that leads into the next breakdown that sends the mosh live every time. You know it's hard when it's on the list and starts with a hi-hat.

"Dying Fetus have been monsters of the riff forever, it's impossible to be into aggressive music and to not know who they are. I'm sure everyone has that one experience where they've had to tell someone who's not into heavy music that they're listening to a band called Dying Fetus and watched that person's face drop."

Aaron (Guitar): "There's just no need for this breakdown to be as hard as it is. Volumes are insane when it comes to dropping absolute filth that still has real groove behind it and this breakdown is the perfect example. The whole song is proper pigeon neck bait but then 2:20 drops and you're grooving regardless.

"Volumes are another band that are long time masters of the riff. I've been hooked ever since The Concept of Dreaming album dropped in 2010, one long decade of pure filth that is."

Dan (Drums): "There's no way this breakdown could be missed from this list. Despised Icon got me into Deathcore back when I just used to listen to Deicide and Behemoth on repeat, then my best friend showed me Furtive Monologue and I found my new favourite band.

"They wrote one of the most crushing songs of all time. The first two minutes of the song are pure chaos filled with tremolo guitars riffs and mind blowing blast beats followed by the hardest breakdown I’ve ever heard/seen live."

Dan (Drums): "Reflections gave me the best early Christmas present last year by returning and writing one of the nastiest songs I’ve heard over the past decade. Our first vocalist introduced these to me back when we first started and I fell in love with them the minute I heard My Cancer.

"It’s just all there for me...the tech, the ridiculous drums and the dirtiest vocals possible. The whole song feels like one big dirty breakdown with all over the place licks and heavy lows."

Dan (Drums): "Josh Travis joining Emmure and bringing some of that Danza flair with him took Emmure to a whole different level for us. They've always had insane breakdowns, but the end of Smokey (at around 1:30) is just revolting combining Josh's riffs with Frankies vocals is a match made in heaven.

"Proper, proper hard. We really think with songs like Smokey and the rest of the Look At Yourself album as a whole it really shows how heavy bands can re-invent themselves and come out stronger than ever."

Dan (Drums): "We've had to actively avoid making the entire list Despised Icon songs, but we thought we could get away with two. DI are still showing us young ones who the real GOAT's are, they come with the hardest and fastest riffs in the game and the breakdowns to match.

"The whole second half of this song is just one disgusting breakdown after another, which when I first heard it I burst out laughing cause of how heavy it was showing us why they're still the absolute best."