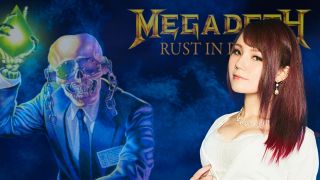 Rust in Peace was my first Megadeth album and is my favourite. It’s like a treasure chest full of timeless metal artefacts – I can’t believe it’s been 30 years since it was originally released! The song order is great too.

Straight off the bat Holy Wars… The Punishment Due has me thrashing my head, then straight into Hangar 18 with its tempo changes and guitar solos. Just brilliant, can’t help but raise my fist.

I think that Marty Friedman joining the band for this album played a big factor in it having more prominent melodies than previous work, and less of a dark atmosphere.

I’ve heard him say that he’s inspired by Japanese enka and that he tries to incorporate the “fist” of enka into his guitar technique. There’s something there that resonates with a Japanese heart.

Tornado of Souls has my favourite guitar parts of the album. Those riffs! That solo! Ah, it’s beautiful. Thrilling yet filled with pathos. No wonder it’s one of their most popular tracks.

Before that there’s Lucretia, another of my favourites, with its bewitching mid-tempo riff. This is what I mean when I said Rust In Peace song order is fantastic, Lucretia flows into Tornado of Souls so neatly.

Megadeth has produced so many masterpieces over the years. I’m glad I was asked to only rate this album’s tracks in order and not to select my favourite all-time Megadeth tracks, there are far too many to choose from and I’m sure there are many more to come too. I can’t wait to hear them.

The riffs and solo melodies are out of the world. My absolute number one track on the album.

That intro, the way the song develops, and the second half of the guitar solo are just some of the highlights for me. Not quite number one for me, but then not much can beat Tornado of Souls in my books.

Catchy riffs and Dave’s vocal make this really stand out! I love the way it flows into Tornado of Souls too.

One hell of a cool, crisp riff! A definite Megadeth definer. It would’ve scored higher up if it was a bit more condensed, but that’s just my taste

A different feeling than the rest of the album. A dark first half and final, frantic minute. Wonderful. Five Magics, fifth place.

I love the sense of speed in this song, it definitely takes no prisoners! Great chorus too, but missing the hooks present in some of the tracks above.

Poison Was the Cure

Catchy and speedy... once it gets going! The minute intro is a bit too long for me

Sharp and safe! But a bit subdued compared to the rest of the album.

A suspicious song composed of just drums and bass! Even though I’m a bass player, this one is at the bottom of my ranking. Perhaps if it was a bit more fancy it would be higher up.