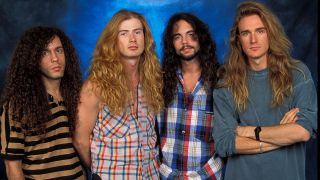 Everybody makes mistakes in life. It’s how we deal with them that really matters. During a gig at the Antrim Forum in Northern Ireland on May 11, 1988, Dave Mustaine committed a Death Star-proportioned clanger that resulted in a semi-riot and caused his band, Megadeth, to leave town with police protection. Happily, Mustaine not only learned from this naiveté, he also drew upon the experience to inspire an all-time great thrash-metal masterpiece.

The controversy occurred as the California four-piece toured their third album, So Far, So Good... So What!. Although Mustaine had a grandmother born in County Cork, he was largely ignorant of the ongoing ‘troubles’. This left the guitarist vulnerable to an outspoken fan, who after a long afternoon’s supping of the Black Stuff, sold his views of the political situation as cast-iron reality.

“I had been enjoying the wonderful adult beverages of Ireland,” Dave recalls with a dark chuckle. “I was overwhelmed about being in Ireland though I didn’t even know the difference between Ireland and Northern Ireland until later on. During the afternoon a guy had been caught selling bootleg T-shirts inside the venue, with the proceeds going to ‘The Cause’. I was told this was a struggle between the Catholics and the Protestants which I thought pretty fucked-up, but I honestly didn’t know that The Cause meant the IRA.”

The blue touch paper may have remained unlit had Mustaine not been struck by a pound coin thrown from the crowd and then been forced to halt the show due to a problem with Chuck Behler’s drums. “I went back and had a shot of peppermint schnapps,” he recalls. “Paul McCartney had famously said: ‘Give Ireland back to the Irish’ and if it was good enough for Sir Paul, well… But when I said those same words followed by: ‘This song is for The Cause – Anarchy In Antrim’ and we played a cover of the Sex Pistols classic things went really fast and I don’t remember everything that happened.”

It wasn’t until sobriety dawned and bass player David Ellefson admonished Mustaine over breakfast that the full enormity of the tale became apparent. “He told me: ‘I bet you don’t remember being escorted out of Antrim last night in a bulletproof bus, do you?’ And no, I didn’t. My reply was: ‘That’s fuckin’ hot!’ but of course it wasn’t fuckin’ hot. Ellefson certainly didn’t think it was cool. Later, when I was alone, I wondered why the fuck I’d done that. But all of us were young, everybody [in the band] was drinking and smoking and we were dealing with a lot of internal personal struggles.”

“When Menza got on the drum set I immediately knew [he’d join the band],” Mustaine says. The exchange restored a punk-style aggression to Megadeth’s style, following what Dave considers the slightly “jazz-metal” flavour of the Behler era.

One of the first manifestations of this change was Holy Wars… The Punishment Due. Lyrically, the song drew upon the Sectarianism witnessed by Mustaine in Ireland, though almost three decades later its opening couplet of ‘Brother will kill brother spilling blood across the land/Killing for religion something I don’t understand’ still rings true in a variety of broader ways.

Megadeth had already begun bringing political content into their songs two years earlier with the song Peace Sells from their second album Peace Sells… But Who’s Buying?. Mustaine was all too aware of the potential pitfalls of further statements in that vein, but felt he had no choice.

“Taking a stand on anything of importance can be a risky card to play because you stand to lose half of your fans. But what good comes from playing safe all the time? You should question everything.”

To Mustaine’s frustration, some have chosen to focus upon external issues rather than the quality of his writing. “A lot of people that got on the feud train discounted my work because they chose sides – or chose them too early,” he sighs. “They just didn’t hear both bands [Megadeth and Metallica].”

In a musical sense, the resulting six-minute piece is pulled together from two differing song segments – Holy Wars revisiting the experiences of Antrim and the latter half, The Punishment Due, being inspired by the Marvel Comics character ‘the Punisher’ who also appeared in the earlier song Killing Is My Business… And Business Is Good!. “Those who are aware of my writing style know that when there’s a dot dot dot, something more is coming,” Mustaine comments. “Holy Wars is the only song I ever recorded the solo on and kept the very first take – that’s why the amp screams like a volcano erupting at the beginning.”

Mustaine covered the Democratic Convention for MTV back in ’92, and certain more recent songs such as United Abominations and Washington Is Next have seen his writing become even more political still, but he’s insistent that running for public office is out of the question.

“Nope,” he replies. “I’m not affiliated to a political party. I thought I was a Democrat and then thought I was a Republican, but now I’m disillusioned with both sides. But I’m an American. As far as politics goes, in this country we’re all Americans and I would love it if our music brought together people from everywhere.”

Holy Wars… The Punishment Due went on to become a staple of Megadeth’s live repertoire, but Mustaine’s mind never takes him back to that night in County Antrim.

“I don’t think of what happened as a tragic faux-pas, I was a very innocent person who was provoked. That’s why I call myself foolish [in the lyrics]. But I learned a whole lot from the experience.”