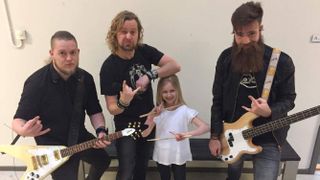 Earlier this month we brought you news that 10-year-old Johanne Astrid won this year’s edition of Denmark’s Got Talent with her kickass drumming. That’s right, she’s not old enough to buy a copy of Viz but can jam like an absolute demon (we’re not jealous, honest).

But what drew the miniature tub-thumper to the drums in the first place? And what’s next for the talent show protege? Well it turns out she’s already part of a band called The Mofos, and is hoping to “play on some large festivals this summer.” That’s no easy task, but one we reckon Johanne is more than capable of. Here’s what she had to say when we caught up for a quick chat:

When did you first start drumming?

Why did you want learn the drums?

“I have loved music ever since I was I baby. My parents put up a small trampoline in our living room and I jumped on it while watching concert DVDs – especially AC/DC! My parents’ plan was to let me start on a drum kit and then move to guitar later, but I stuck with the drums.”

Why do you love rock music?

“I love rock music because there is so much energy in it. And I really like the way rock music makes me feel – like I am in a bubble of energy.”

How often do you practice?

When I was seven-years-old I practised approximately 15-20 minutes a day. It has now increased since to two hours every day.”

Who are your favourite bands?

“I don’t know so many band names and some bands I only know a few songs by, but I really like the Danish band Dizzy Mizz Lizzy, AC/DC, Kings Of Leon, Led Zeppelin and Toto.”

What are your favourite songs to play?

“There are so many. Right now, in our setlist there’s Slither by Velvet Revolver, Purple Haze by Jimi Hendrix, Long Way To The Top by AC/DC, Mistreated by Deep Purple, and Love Raises Its Ugly Head by Living Colour. But also love softer songs like Rosanna by Toto, Use Somebody by Kings Of Leon, and So Much To Say by Dave Matthews Band. The first songs I ever played were Make It Wit Chu by Queens Of The Stone Age and Back In Black by AC/DC.”

How did you get involved with joining the band The Mofos?

“The bassist Christian (Stenrøjl) was the person I ever tried to jam with when I was eight, and when I wanted to get a band for the TV thing we called him, and brought Rasmus (Pedersen) and Kristian (Sloth) on board. After the TV show we all agreed that it had been so much fun and we wanted to continue together. We want to play real, no-nonsense rock music and show that rock has no age or expiry-date. We have a mission to get more kids to playing an instrument instead of just playing on an iPad.”

Why should kids learn instruments?

“It is so much fun. You also learn to concentrate and how to work better with others. It is tough in the beginning, but if you stick with it you will get so much back. Music is a fantastic world to be in.”

Why did you go on Denmark’s Got Talent?

“They called and asked me for audition. I didn’t know I was going on until two weeks before the audition because my parents didn’t want me to think too much of it.”

Did you ever think you would win?

How has your life changed since you won?

“My life hasn’t changed, except I’m now saving for a drum education when I get a little older, perhaps in the USA. The biggest change is that now I have some great musicians to play with in our band.”

What does the future hold for yourself and your band?

“I hope to play with the band for many years and perform for many people. I will continue to practice even more and get some good drummers to teach me. I will also start getting keyboard lessons to understand music better. I love to write songs myself and would like to be able to write down the notes.

“My dream is to live from playing music when I grow up – to play in a super band and to be someone you call for when you need a good drummer.”