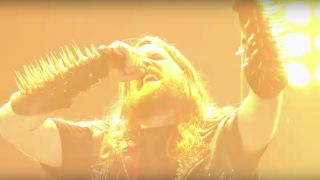 Earlier this year we brought you the brilliant news that devout heavy metal fan Louis-Paul Gauveau made it through the audition phase of The Voice: Quebec with his cover of Necrophagist’s Stabwound. And now we have even better news…

He’s made it through to the next round again!

Engulfed in flames and flanked by two guitarists behind fences (for some reason), Louis-Paul growls and snarls his way through a blistering rendition of Canadian black metal band Incandescence‘s L’abîme du Rêve. Going the whole 666 yards, he barks and screams like a maniac with his spiked arms and studded leather jacket – you couldn’t look much more metal, could you?

We don’t know what his next choice will be, we’re hoping for some King Diamond to really push his vocal abilities to the limit.