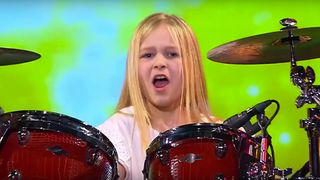 We often bring you videos of people auditioning for TV talent shows by singing or playing metal songs – remember the 82-year-old who sang Bodies? – but this time a little rocker has gone and WON one!

10-year-old drummer Johanne Astrid has won the 2017 series of Denmark’s Got Talent by tubthumping her way through the likes of Rage Against The Machine and Led Zeppelin. Starting at her audition (with killer light-up drumsticks and floral snare drum) and climaxing at the grand finale with live band, Johanne kicks ass throughout. Seriously, she’s going to be a world-famous drummer. If a 12-year-old can join Korn, we reckon Johanne could fill in for Lars Ulrich if he was ill.

Check out her road to stardom below.