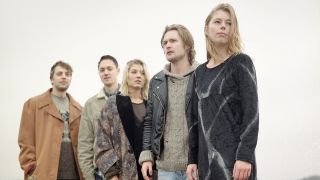 With Lloyd Webber’sSchool Of Rock currently on Broadway, a five-piece from Holland have literally graduated from prog school.

Golden Caves met at Rotterdam’s Codarts University – an institution that specialises in music and performing arts. Vocalist Romy Ouwerkerk explains how a chance collision on campus altered her trajectory.

“In our second year, me and the drummer Erik were in a disco project. Our new guitar player Alex heard me talking about Porcupine Tree and Anathema and he said we should form a band. In the end, we chose prog and the drummer and I skipped the disco band,” she laughs.

To gauge reactions they released a self-made EP in 2013. Award nominations and a victory in the Dutch Band Boost talent competition led to an enviable spot playing in front of 20,000 people at Wantijpop Festival in Dordrecht.

After graduating in 2015, the quintet concentrated on writing new material for their first full-length album. Fittingly for a fusion of pop and prog influences, the release is titled Collision and it’s a multifaceted jewel that reflects differently depending on the listener’s own perspective.

Drummer Erik Stein describes how that sound coalesces. “That mixture comes naturally with the five of us in the room,” he reveals. “It’s our biggest friend and biggest enemy. People can’t put us in the corner of typical prog because it’s too modern, too poppy. For the pop world it’s too prog, so we sit in the middle of two fanbases or two genres.”

Ouwerkerk goes further, explaining that while the end result may be a natural meeting of minds, that journey needs everyone on board. “We don’t do concessions,” she emphasises. “If we have three band members who like an idea and two who don’t, we continue to make it better and better until everyone stands behind the product. That’s what makes all the layers. We all have different backgrounds growing up and listening to music. You automatically take that into the rehearsal room without even knowing it. For me, it’s London Grammar, Anathema, Radiohead, Massive Attack. Ambient meets prog.”

There are layers of significance in the album title too, beyond a superficial description of styles.

“We were confronted with real life,” Stein reflects on the shift between student life and the reality of trying to make a young band a viable concern. “Suddenly you’re an adult and you’re getting bills on your doormat. It was a hard transition for us and we tried to use the lyrics and the music to help us go through that phase. Collision also reflects on the problems going on in the world.”

The band are working now on delegating some of the business processes to allow more time for creativity and have already begun writing sessions for a follow-up.

The singer tempers, “Explodes in a prog way, not like a Katy Perry pop song!”

Golden Caves are more than qualified to succeed with the former and to do so with distinction.

Current release: Collision is out now on Freia Music

Limelight: Meet Brother Ape and their mega riffs from Sweden

Limelight: Why is soundtrack composer Steve Gibbs moving over to prog?