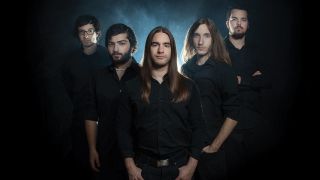 Think of violinists in prog and who comes to mind? Darryl Way? Eddie Jobson? Jean-Luc Ponty? Well, Cydemind’s young fiddler Olivier Allard has a different hero. “David Garrett was my teen idol,” he tells Prog, referring to the poster boy of crossover classical music. “That’s why I have all this hair! And Nigel Kennedy too. He plays classical music at the highest level… Both Nigel and David try to take it to more people.”

Cydemind are trying to get their own music to a bigger audience too. Formed in Montreal in 2011, Allard’s joined in the current line-up by drummer Alexandre Dagenais, pianist Camille Delage, Nico Damoulianos on bass and Kevin Paquet on guitar. Together they’ve cultivated a highly melodic and symphonic hybrid of instrumental prog metal with a classical slant. Allard has just finished his masters degree in violin performance at Montreal University, and is aiming at his doctorate. “The violin has a really similar range to a singer, and I’m trying to make melodies people can sing over metal riffs. So many prog bands are really similar these days, so we hope this is what makes us unique and interesting.”

Their self-released, full-length debut album Erosion shows them to be both those things. Pieces like What Remains, the particularly beautiful Derecho and whopping 28-minute title track are alloys of the band’s prog influences – notably Dream Theater and Symphony X – and that concert hall approach. Allard’s playing is by turns dizzyingly nimble and achingly plangent, and the band – highly accomplished musicians all – park the showboating and pull relentlessly in the same coherent, melodic direction. It’s a heady mix that should have label heads seeing Canadian dollar signs.

To date they’ve played just a few small but well-received shows in Quebec – ‘refreshing’ is a recurring compliment. Erosion’s out now, there’ll be a launch show and then in August they embark on a mini tour of Canada with fellow countrymen Pyramid Theorem and Universe Effect. “Prog’s definitely growing in Montreal, and across Canada,” says Allard. “There are lots of underground bands from Montreal, but not really an internationally known prog band.” That might be about to change.

All Around The World: Meet Jug Bundish, the Costa Ricans who dig far-out sounds

All Around The World - Jupiter Hollow from Canada