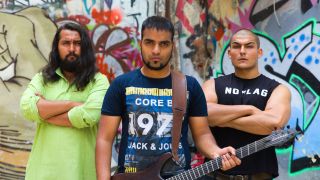 Every year there's a song that for some, at least, becomes the soundtrack of their summer. This year it might have been Ghost's pop-metal anthem Dance Macabre. For some it would Parkway Drives's exhilarating The Void. Or for the 10 million people who've watched the video on Facebook, it might be Ari Ari by New Delhi metal band Bloodywood.

It's not your typical metal anthem. Ari Ari is based on the Punjuabi folk song Baari Barsi, which is a traditional call-and-response tune which calls for multiple, improvised interpretations. And because it's not unusual for people to add their own verses, it frequently gets integrated into other songs. In Bloodywood's rampant version, there's a fearsome rap from Raoul Kerr, some impressively aggressive vocals from Jayant Bhadula, and some fine guitar work from Karan Katiyar, much of it performed from the back of a camel. And it's as catchy as fuck.

If this all sounds like it has the faint whiff of novelty of about it, there might be an element of truth in that. The band's Facebook page claims they make "metal versions of shitty pop songs!" – they've previously covered everything from Smells Like Teen Spirit to Taylor Swift's Look What You Made Me Do, and earlier this year Karan assisted well-known Indian bagpiper The Snake Charmer with her metal version of the theme from The Avengers.

But it's also a serious business. Two years ago Karan quit his job as a corporate lawyer to concentrate on the band, and while Jayant still woks as an artist manager for an entertainment company, it's all ambition, all the way. "We’re very ambitious," says Karan. "The long term goal is to be popular globally, with a sound that inspires people to make meaningful music by playing actual instruments once again.

"Up till very recently all we did was interpret pop songs in a metal setup and delete the hate comments that followed. When we experimented with Punjabi metal, we got a lot of appreciation from everyone, and the video crossed a million views on Facebook in no time."

"We realised it was way more rewarding and satisfying than anything we had done before, and actually brought something new to the table," adds Karan. "Original songs were always in the pipeline, and we were waiting for the right moment to put them out, but now we’ve got a new direction sound wise and are working on original material!"

That original material is now here. The song Jee Veerey (the literal Punjabi translation is "Live, Brave One") speaks about fighting depression and mental illness, and Bloodywood have partnered with online counselling website Hope Therapy to offer fans counselling sessions paid for by the band.

Kerr dedicated part of the song to Chester Bennington, tweeting, "I want to dedicate the second verse to Chester, the man who saved millions from drowning before being pulled under. I love you and I miss you. Watch over me my brother."

How/when/why did Bloodywood get together?

Karan: Before Bloodywood became a band, I would regularly upload videos on YouTube making parody metal versions of popular/cult Bollywood songs. They were very well received but I had a hard time finding a permanent vocalist. Upon meeting Jayant at a local gig and subsequently recording his vocals, I had to look no further. His range and versatility was miles ahead of people I had worked with.

How did you end up working with Raoul Kerr on Ari Ari and Jee Veerey?

Raoul contacted me to make a lyric video for him after seeing my work with Underside. I wasn’t expecting him to be a rapper considering the fact that he was this huge Phil Anselmo looking dude with a deep voice, but upon hearing his tracks and lyrics I knew he would work really well in an angry metal band. I ended up shooting a video for his song and asked him whether he wanted to work with us on one track, to which he agreed without hesitation.

What makes you unique?

It is definitely the new Indian folk-infused sound and how we use Indian grooves and instruments. Not like it has not been done before, but our way of using these elements is more focused towards integrating them into metal seamlessly rather than making them stand out.

What's life like for a metal band in New Delhi?

Not too busy. Delhi has lots of gigs, recording studios and rehearsal pads but the audience is still sparse and it’s basically the same group of people at every gig. It’s a small, yet adamant scene and everyone is very helpful.