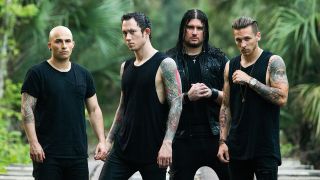 Matt Heafy (GUITAR/VOCALS): “I feel like we have a definitive version of Trivium now. Not to say that we weren’t ourselves before, but we’ve had so many different sounds and eras of the band. I’ve always been a fan of bands that stretch themselves into other areas, and obviously we’ve done that, but today live, as a singer, as a guitar player, as a bandmember, I feel like we’ve nailed exactly what Trivium is. Some bands are born with that, some bands never find it. It’s taken us some time, but we’ve done it.”

How difficult has it been to stay relevant?

“One thing we’ve done is to see what the trends are and make a conscious decision to move as far away from that as we can. I think on [debut] Ascendancy, we nailed a style that was very popular, but when I noticed that everyone was doing the same thing, we wrote The Crusade to go against the stream. And then after doing that, we thought, ‘What can we do that is totally unlike that? Longer, more progressive songs!’ So we constantly shift from what our peers are doing.”

What was it like being heralded as ‘The New Metallica’?

“Another publication named us ‘The New Metallica’, and then on the next album they said, ‘This is the worst album ever. They’ve abandoned their sound.’ So you have to learn to roll with the punches. We were cocky and confident about the fact that we were a great live band, so if we got those accolades we were happy. Now we’re just confident, I like to think. But it’s always been about creating our own destiny.”

How would you advise a new band experiencing something similar now?

“I do get bands asking me for advice, actually. Only recently, a younger band that had quite a buzzy moment said they had been hearing that a very well-respected metal band were saying some things about them, and they wanted to know why. I told them that it was probably because this band didn’t know them, and when bands haven’t met that younger band, they have to make their own opinions out of the press. But I told them, ‘Just introduce yourself and don’t hold it against them. They’ll soon see the real you.’ I’ve been in this band since 1999 now, since I was 12 years old. It’s essential to pay your dues, and, whatever anyone thinks, we definitely have.”

How Trivium Came Back From The Brink

Trivium: Rise Of An Empire

Trivium: "Anger a samurai, they can chop your head off. That's metal!"