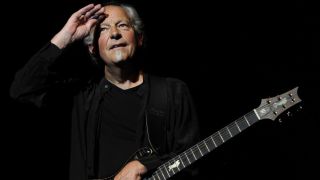 Martin Barre recently sat down with Classic Rock to run down his picks for five essential guitar albums. As for what he looks for in a great guitar record, he says, “Musicality is the main thing. I don’t need to be blown out of the water by technique and impressive displays of lightning-fast playing. For me, the beauty of music, and this is true for guitar music, lies in its subtlety. I look for interesting sound and melody, space and dynamics. There’s very little that I like, but when I do find something that hits me, it hits me hard.”

And he points out that picking just five albums was a tall order: “There’s so many guitar players I enjoy listening to,” he says. “Leslie West, Gary Moore, Joe Bonamassa – we could go on and on. Five records just scratches the surface, but here goes…”

Below, Barre discusses his selections for five essential guitar albums.

In the late ‘60s, I got into the blues and started listening to the electric players much more fervently than I did before. Fresh Cream was one of the big albums of the day. Everybody sort of looked to Clapton as being the pinnacle of great guitar playing.

“But for me, it was the band’s next album that really hit the mark. Disraeli Gears was such a stand-out record in every way. I remember how excited I was when it came out, and when I finally played it, the guitar sounds were unlike anything I’d ever heard before. It seemed to exist in its own world.

“Great songs, great singing, great playing – it’s a perfect album. You just can’t compare it to anything else. Eric Clapton’s guitar sound is so expressive. I think this album shows him at his very best.”

“I was playing in the backing band for the Coasters when I first saw Jimi Hendrix. He had flown over to meet with Chas Chandler, and he was staying at our hotel. He was in the lobby, sitting atop a Vox AC30 and playing his Strat, and I thought he looked totally bizarre. I had to find out who he was. I would end up seeing him quite a few times after that; in fact, Jethro Tull supported him in Europe.

“Above all, I loved his personality and his humility. He was such a nice person. The record of his I’m picking is a best-of collection called Experience Hendrix. It’s got everything I love on it. His singles are all brilliant, and his version of All Along the Watchtower is phenomenal. A great song made unbelievably great by Hendrix.

“His playing is eternal. Nobody will play like him ever. People will copy him, there will be tribute bands, but nobody can touch what he did. It was straight from the soul.”

“Dazzling. The technique and musicianship are subliminal. This is a stand-out album in every way. I’ve had it for years, and I play it all the time.

“Whenever somebody comes to the house and says, ‘Got anything with some really good guitar playing?’ I’ll play them The Guitar Trio. It’s guitar playing at its very, very best.

“Sometimes the fun of this record is trying to figure out who’s doing what. Sometimes you can tell by the sound. If I had to pick a favourite player of the three, and it feels a little unfair to, it might be Paco de Lucia. I love flamenco music. His technique just knocks me out.”

“This record is a joy. I love rock music and blues, but sometimes you just want to mellow out and hear something truly beautiful. This is what I’ll put on for those occasions. It’s something every guitar player should check out.

“All guitarists, no matter what they play, can learn something from this record. The quality of musicianship, the dynamics, the harmony – it’s a lovely listen.”

“When I go in my studio and I’m not working, I put on a CD and play along to it. I’ll play to the entire thing, too, so I feel as though I’ve had a bit of a workout. My favourite is Talk to Your Daughter. It’s such a fun and involving listen.

“Robben’s got the sound, doesn’t he? It’s stunning. You can tell he’s spent hours, days, weeks and months finessing what he does. It’s such a precise, almost cultured, guitar sound. Beyond that, there’s his playing. His note selection, his pitch, his dynamics – it’s all perfect. He goes off on some wild tangent sometimes and throws in a crazy run, but then he’s back to his beautiful, lyrical blues style.

“Robben Ford is a really great player. I’ve seen him quite a few times, and he’s astonishingly good. If you don’t know his work, you’ve got to check him out.”