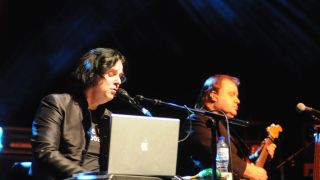 HAPPINESS IS THE ROAD

Marillion seem relaxed enough as they arrive for this day of days. In the tiny kitchen, Pete Trewavas puts the kettle on. Mark Kelly squeezes dressing onto his salad. Ian Mosley spills coffee down his white shirt, perhaps because he is in a darkened room and has forgotten to take off his sunglasses. Steve Rothery lugs several guitar-shaped cardboard boxes from his car into the studio.

Steve Hogarth is the last to appear, having done battle with the M4 after a night in London. He is frazzled from the traffic, and from having seen a policeman walking along Kensington High Street holding a machine gun. The incident has tripped memories of a Marillion tour of Brazil, during which the promoters employed an off-duty policeman as a security guard for the band. He was moonlighting from his day job chasing drug gangs in Rio De Janeiro. The guard was the last of his squad left alive.

Dawn, who has beaten thousands of competition entrants for this chance, is to go first. She’s playing finger cymbals on a track called Essence. It’s a nice touch: the finger cymbal is one of Marillion’s quirky signatures, a little chime heard on many of their albums. She is led through to the studio while the band watch through the glass of the control room. If she’s going to crack under the pressure, it will be now. But she doesn’t. She nails it after three or four goes, despite never having been in a recording studio before and having quite a complex count-in to deal with.

“We thought you could play the tambourine,” says Mark Kelly, turning to me. “Should be easy, shouldn’t it? You’ve been in enough recording studios.”

This is true, but all people seem to do in them is sit around on sofas, drinking and burping. This does nothing to equip you for the moment when you’re taken into a booth, given a pair of headphones and handed a musical instrument you have no experience of playing. Still, the tambourine, eh? How hard can it be? Anyone can play a tambourine.

Mike Hunter presses a button and the music begins. A line of grinning, gurning faces stare through the control room glass. Playing the tambourine is hard. It doesn’t sound hard. It doesn’t look hard. But it is hard. The problem is the bells that jingle as the tambourine is waved back and forth. If it’s waved too quickly, they don’t jingle. If it’s not waved quickly enough, they jingle too slowly.

The music in the headphones is so loud that the jingles of the tambourine sound as if they’re coming from deep underwater; tiny, muffled ‘tinks’ from the far distance.

“Are you right handed, Jon?”

“Sorry, it sounds like you’re playing a lefthanded one.”

There is extended laughter from behind the glass. Everyone seems to be enjoying the tambourine playing enormously, except for me. An unpleasant fear-sweat takes hold. The music begins again.

‘Effortless’ is not the adjective Marillion or Michael Hunter would apply to their working methods. There is a romantic notion that creativity should come easily, but it does not. It’s 90 per cent perspiration, digging around in the psychic dirt, mining for nuggets that come along only occasionally and that must be polished and burnished. There are no short-cuts. At work on their 15th album, Marillion know this. They begin each day with a 30-minute jam, the results of which are rigorously catalogued by Mike Hunter.

“You have to kind of get that out the way,” says Pete Trewavas. “Then we play something and someone will go: ‘Remember that little bit we did on Tuesday?’ or whatever. ‘This will go with that.’ Then Mike might dig it out and we’ll put it together.”

Sections of music are painstakingly constructed. Slowly they become songs.

The death rattle of the tambourine goes on. Steve Hogarth leaves the studio. Minutes later he bursts back in, holding a gun. At first it seems like a joke. But then he keeps waving it around. Maybe he got it in Rio. They’ll sell you anything there. He holds it up. It looks real.

“Put it next to his head,” suggests Classic Rock’s photographer, unhelpfully. “Do it execution style.”

There is a pause. Then he laughs, and so does everyone else.

“This one’s good though,” he says. “Looks real.” “Yeah,” says Mark Kelly. “Be a nice headline for the mag, too: ‘Journalist shot after crap tambourine session ruins album.’”

“Okay, I think we’ve got enough now,” says Mike Hunter. “Would you like to hear that back?”

We do. Through the control room glass a line of heads shake and wobble with merriment. Mike places a consolatory hand on my shoulder. “Don’t worry about it,” he says. “We’ve got this programme called Pro-Tools. You only have to actually come up with one good tambourine shake and we can capture it and move it in time with the music. Honestly, it’ll sound alright. Promise.”

“That’s what he tells everyone,” says Ian Mosley.

One Saturday towards the end of August, a package drops through my door. Sender: a Mr I. Mosley of Hertfordshire. Inside: Essence and The Hard Shoulder, the two discs that make up Happiness Is The Road. Track seven of disc one is called Woke Up, and it sounds horribly familiar. But hang on… It actually sounds quite good, too. There’s a waft of tambourine bells jingling merrily deep in the mix. It’s not particularly audible unless you strain yourself to listen, but there nonetheless – and even more remarkably, in time with all the other instruments.

“We were thinking of getting you a gold tambourine made,” says Kelly. ‘But then we heard what you did.”

We have reassembled at the Racket Club to talk more fully about the record, which, despite the tambourine, has vindicated their decision to work so long and hard. The results are beautiful and mysterious, and with Essence in particular they seem to have distilled whatever is unique about them. It’s probably the best record they’ve made, ahead even of Afraid Of Sunlight and their last two, Marbles and Somewhere Else.

Ranged against them is an invincible tyranny of reputation. They are forever the band who made Kayleigh. Mention of their name to the general public usually elicits a response of: “Oh, are they still going?” Just recently they were a part of an ‘80s Band’ giveaway in the Daily Mail. And yet here is this music, coming year after year in a wonderful flow that even they don’t fully understand.

They know already that their rewards for the new album will be low-key, but no less meaningful for it. They inspire fervent devotion in their fan-base.

“What we know is that our music connects with people,” says Hogarth. “I had someone telling me that we’d given him a path to live by; people saying that the music has helped them through a bereavement or a love affair and all of these things. I suppose it’s the upside of what I get for being the guy that’s not Fish – all that baggage that I carry around.”

Hogarth falls silent for a minute, considering his lot. Marillion are a band out of time, not the thing from the 80s that people think they are but instead a cult band of a new and different kind, made greater by their circumstances but constrained by them too.

“When we go off and play with other musicians, which we do sometimes, you find yourself thinking: ‘Oh, this is strange,’” says Rothery. “Then we start to play together again, and we just know what each other is going to do. It sounds corny, but something magical happens.”

With the record finished, ahead for Marillion lie rehearsals for a big tour and, next year, two of their fan convention weekends, one in Canada and one in Holland. Both of them are already almost sold out.

“We need to start thinking about a set,” mumbles Mark Kelly. “There’s only about 120 songs for us to choose from.”

“Actually, do us a favour,” Steve Hogarth says to me. “Email me a list of the 20 songs you’d put on the set-list.”