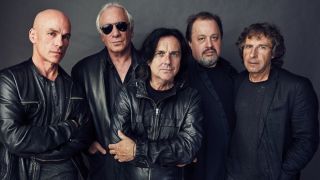 Marillion give us a track-by-track breakdown of their new album F.E.A.R.

Tucked away in a rather anonymous business park in the Buckinghamshire countryside, the Racket Club has been Marillion’s headquarters and recording studio for over two decades. At its core is a control room, decorated in eastern drapes and artefacts that provide the comfortable feel of a Mongolian yurt. It’s here, as singer Steve Hogarth delights in explaining, that “all the magic happens”, and with the band’s new album F.E.A.R (Fuck Everyone And Run) recently completed and set for a September release, he’s visibly enthralled with results. It’s a beguiling album that, with three of the five tracks extending to over 15 minutes, is beautifully layered, and as guitarist Steve Rothery neatly puts it, “the album really embraces who we are and what we do”. With that thought, Hogarth talks us through the lyrical themes that provide an astute and salient take on the state of the world.

Split over five segments and extending to over 16 minutes, the track possesses the sublime musical passages that Marillion have always been known for.

Steve Hogarth: “It’s really about a sense of foreboding and a feeling that everything is going to change in this country. I was trying to paint a picture of someone mowing their lawn in a quiet garden as a storm comes towards them. It’s an ecological storm, a financial storm, it’s a humanitarian storm. It’s a feeling that there is a sort of watershed coming. I don’t know what it is, but there is just a foreboding. If there is a central theme to the record, it’s that and the fact that we brought this about on ourselves and a sense of shame. El Dorado is for me about the fact that there’s a sense of shame over the migrant crisis. It’s about the way that this country has responded to the refugees spilling over from Syria, which is a war that we’ve stoked the fire in, even if we haven’t created it.”

Ostensibly a song about peace, with archetypal 60s sentiments of disarmament, it’s a polished, succinct track that also has a sublime earworm of a chorus.

Steve Hogarth: “That was one of the tracks that we worked on at Real World Studios [owned by Peter Gabriel]. They’ve got this big screen in the studio at Real World because they occasionally do soundtracks for films as well. So we can drop the big screen in the evening and just put a movie on, with the sound off and just have that running while we are jamming as well. So we’d be in the dark and there would be a vibe going as well. We were also able to work late, stop and have dinner and then go back in to the studio space at nine or 10 at night, and there’s always a different atmosphere than there is during the day.”

An expansive song that contains five distinct, seductive sections. With soaring Rothery guitar solos and opulent keyboards, it’s one of the finest tracks that the band have released over recent years.

Steve Hogarth: “The Leavers is a totally different animal. I wrote it really as a response to the corrosive effect that travel has on you. When you’re in a touring band, or even more so in a touring band’s crew, you’re hardly ever home, you wake up in a new city every day. There’s a repetitive thing of the process of putting a show together, perform a show, you take it down, get on the bus, go to sleep and go again. For crew that’s the life. When you get home if you’re off, you’re not being paid and you feel like you’re unemployed. It’s also about how these gypsy, thrill-seeking people seem to arrive, do their thing and then are gone. You can’t trust them because they’ll forget you as soon as they’re gone.”

Another shorter song, there’s a distinct sadness to the lyrics that’s neatly equalled by the authoritative musical backdrop.

Steve Hogarth: “It’s about several things. It’s a sort of sister story to The Leavers in some respects. It’s about trying to settle into domestic life, about wanting to live passionately and in the moment. There’s also the thing about slowly coming to terms with the fact that you’re getting old, and you better get used to the fact that what you are railing against is very beautiful and natural. There’s a line in the song of ‘I used to be centre stage, time I should act my age’, and that really is what this song is about. It’s about at one time feeling you were the most important person in the equation, and having to come to terms with the fact that you’d better stand at the side and watch something beautiful going on, rather than try and occupy that space yourself, with your own ego.”

A powerful lyrical statement on the general state of the world, the track runs to almost 20 minutes of luscious progressive rock.

Steve Hogarth: “This is really a song about how the old systems of democracy have become overwhelmed and compromised by money and corporations. Along with the fact that the division between rich and poor is widening all the time. In 1989 there wasn’t any money in Russia as everybody owned it all. Within 10 years, there were some people who were ludicrously rich. I mean, how can you do that legitimately? The only people in Russia who had the cunning and sharpness to become businessmen were the politburo scumbags at the top. They controlled everything and had the keys to the locked doors where the money was. There’s also a healthy sprinkling of tax evasion and a kind of overall loss of faith in what this country represents to me.”