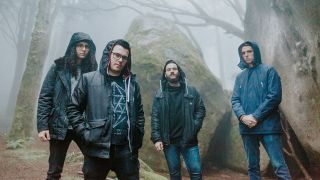 Forming in 2013, Portuguese tech-death metallers The Voynich Code are on the cusp of releasing their debut album Aqua Vitae, which Metal Hammer is streaming in full. With an ear still pointed toward their deathcore beginnings, the band have created something much more progressive, with ambient atmospherics and expansive soundscapes, allowing their technical knowhow to thrive.

You can listen to the record in its entirety below.

Want to know more about the album? Well we’ve got an in-depth track by track break down from the band. Neat, huh?

André Afonso (guitar): “When we came up with the idea for the artwork of Aqua Vitae, I immediately started thinking about writing the intro for the album, mixing the vibe and elements that I saw in the artwork. On the cover, the goddess Amunet is submersed, surrounded by snakes, with petals slowly flying around her, which for me, transmits tranquility but at the same time something enigmatic, because of the snakes’ meaning and her look. The intro Aqua Vitae starts quiet and slowly, and it keeps growing progressively, creating an enigmatic vibe.”

André: “I can’t think of a better song to start this journey. It kinda shows the new ‘identity’ that The Voynich Code has evolved into. To more tech riffs, the groovy rhythms, maintaining our breakdowns and synths, and a catchy structure. For the final solo I wanted to write something epic and different than everything I wrote on Ignotum, something faster and technical, but at the same time, with harmony.”

Nelson Rebelo (vocals): “Just like most of my lyrics in this album, Aurum represents one of the various stages of depression. It was based on a storyline created in my head, as if it was a movie, where I, as the main character, live in extreme poverty with the wealthy taking advantage of the poor – creating a scenario where the rich get richer and the poor get even poorer. This track represents the fact that a mental disease can take everything from you, without you even noticing or knowing that you have something wrong with you to begin with – a stage of denial.”

Euler Morais (drums): “This song definitely has the ‘TVC vibe’ to it and the synths make a huge part of it. Just like our previous EP Ignotum, my favourite part of this track is definitely the breakdown in the middle of the song, followed by a sick guitar lead. For sure, one of the best climaxes of the song.

“André is such a great composer and do not fail one single time when it comes to writing riffs. For me, it’s easy to work around his riffs for two reasons: 1) They are damn good and 2) We are in full synch as we already understand each other’s playing style, just like the whole band. Expect nothing less than greatness on this track, especially regarding the guitars and vocals.”

Vinicius Mallet (guitar): “This was one of the first songs we wrote for the new album. Since Euler joined the band we started having way more freedom and flexibility in terms of drum-lines. Euler can basically play everything, so André came up with lots of heavy riffs and I told him ‘We need to throw a shitload of blastbeasts on this’. At the same time, we felt we needed to prove that we could write songs outside of our comfort zone. We ended up writing one of the heaviest tracks on the album, with lots of fast riffs and fast passages, but keeping the TVC identity.”

André: “Like Vinnie said, this was one of the first songs we wrote for Aqua Vitae. When I started jamming some riffs for it, I wanted them to be powerful and heavy. Imagine that you’re rockin’ out and everything around you is collapsing… Yeah that’s right, this is I, The Weak! And of course, I immediately had Euler in mind, counting on him to do some kickass blastbeats. For the first lead, I wanted to keep it a straight ‘in your face’ and chaotic attitude. For the last one, I maintained the first idea, but with a small variation into something more chill to transmit the idea of ‘everything is collapsed and destroyed’.”

Euler: “This track has the fastest drum lines on Aqua Vitae. Fast blast beats, fast fills, fast pace, but also a damn crazy groove, it’s really easy to bounce with it. When Andre sent me the demos at the beginning of the album composition, I got super excited about it. The guitar riffs are great, so it was a very easy process to work around the details of the song itself, without causing the infamous ‘over drumming’.”

Vinicius: “Flight 19 was the first song we wrote for the new album. When we released Ignotum I had a cool discussion with André about the future of our music and sound. We wanted to do a few deathcore tracks with fast drum patterns and groovy riffs, and I think Flight 19 represents that well. You have a fast intro, groovy riffs and a doombringer breakdown. Nelson also did a fantastic job with lyrics and with the name of the track. The Bermuda Triangle myth is fascinating and fits so well with our band name.”

André: “The first idea of this song was to write some classic deathcore-ish riffs, kind of the same idea of Flight 19, but this one is more progressive and ends in an epic ambience. The idea for Jake Luhrs’ part was to create that chill and progressive ambience that grows up into an aggressive breakdown, it kinda reminds me of August Burns Red nowadays.”

Vinicius: “I came with a crazy tapping idea when I went to Andre’s house to continue writing the album. I knew this track had to be heavy, so I explained to André that I wanted that tapping mixed with a mathcore idea. I’ve been listening to metal since I was a kid and I don’t know… that inspiration came a little bit from The Dillinger Escape Plan, Architects and perhaps Tony Danza. André started writing the rest of the song having that tapping in mind and it became one of the heaviest songs of the album.”

André: “I think the instrumental is 100% connected with the lyrics and the progression on it. It literally starts killing everything and progressively enters some kind of ambience where a person is telling you how desperate he feels. The idea behind the chorus was to create a melodic part to slightly change the climax from the groovy/breakdown riffs but maintaining the same idea. It also created room to write the epic lead harmony that really shines into the song.”

Euler: “I lost my mind when I listened to the demo of this track. Vinnie came up with that crazy tapping idea and Andre finished up the rest of the riffs with his glorious skills. Born To Suffer is my favourite track of the album, for sure. For this one, I wanted to have some sick bass drum patterns to go along with the riffs and a lot of different details to make the track even more attractive to all heavy listeners out there. I really love this track and you should too!

Nelson: “Born To Suffer is also based on a storyline created in my head. It talks about a child born in a third world country that also happens to be at war. This child only knows that life is nothing but agony and suffering, losing all his faith in life and living without knowing what it is to feel compassion.”

King For A Day

Euler: “Oh man, this song is heavy! Nelson does some really nasty vocals here to make the whole song even heavier, it’s such a banger! On this track we have the pleasure to have a friend doing guest vocals, Mr. Andrew Patterson, the beast. King For A Day has a lot of great climaxes, but it really sums up for the finale with Andrew’s nasty vocals and a final touch with a demon-like duo growl! Fast double bass, sexy-ass leads, heavy vocals and super groovy riffs are expected!”

Vinicius: “Behind The Mirror is one of the tracks where we took the guitar writing to the next level. The initial riff is amazing, with a very crazy lead from André combined with keyboards adding a pleasant atmosphere to the track. We invited Ed Garcia in because we always loved his style of guitar playing. He picks hard and understands when it’s time to play fast and when it’s time to have feeling and play slow, he’s a complete guitar player – and also from Brazil just like me! For that reason, I felt a connection with him and it was great to invite him to the album.”

André: “This is a hard one to play. It contains so many tech riffs once again – I guess we love them. The idea was to write something that reminds you fear and that ends being powerful and fearless at the same time. The beginning riff and synths have a very scary vibe around it. Nelson did an awesome job whispering the first verse and starting the song with his demonic vocals.”

André: “I think in Immortalis like the ‘calm before the storm’. It’s basically the same idea from the Aqua Vitae intro, where Amunet is underwater and everything is peaceful, growing into the beginning of a storm which is the last song from the album.”

The Weight Of A Mortals Soul

André: “This is the storm I was talking about. I love this one, it represents power and fear. Riffs are straight to your face while that final breakdown is the heaviest part we’ve ever written, which reminds you you are the master of everything, a true god.”

Nelson: “This track talks about the lack of forgiveness in humanity. We don’t know how to distinguish a mistake from evil acts. This song transmits that humans have to learn to be conscious and less judgmental while acting socially rather than to just judging and acting on impulse.”

Aqua Vitae is out May 5, via Primordial Records.

The Voynich Code are touring Europe at the following dates: