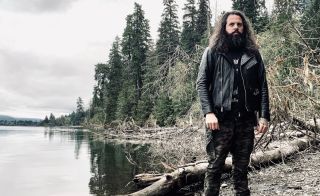 US black metal icons Abigail Williams will make a return for their first album since 2015's The Accuser – their final album on Candlelight records. The forthcoming release Walk Beyond The Dark will hit shelves on November 15 via Blood Music and it promises to be "equal parts introspection and extremity".

Walk Beyond the Dark incorporates many of the defining features that have made the band so distinctive in their fifteen years. A blend of raw, frost bitten true Norwegian black metal, Dimmu Borgir shaped symphonic elements, Gothenburg-styled death metal grooves and doomy atmospherics.

Opening track and first single I Will Depart is the stunning testament to the band's legacy, an epic eight-minute journey through blackened terrain from the viseral, gritty black metal intro to the vast icy tundras of its choral interludes, the track evokes the spirits of contemporary Darkthrone, old school Dimmu, Carpathian Forest and other black metal heavyweights to create a sound that is entirely its own. List to the track to see for yourself below:

Hammer spoke to Abigail Williams' mastermind Ken Sorceron to dig further into the new album and his song writing process.

Hammer: There have been many line-up changes to the band, what do you think this particular line-up has brought to the table? Were any of the new members involved in the songwriting process?

Ken: "Mike Heller’s drumming brought a lot to the table on this album in my opinion. We've been meaning to work together for a long time now, and finally made it work.

"Bryan, who played bass, has been in the band for quite a while now, and actually played on Becoming back in 2011 but wasn’t able to be on the last record due to visa issues, as he lives in Ireland. I just love working with that guy, and he’s one of my best friends in the world.

"Other than that, we had our friend Chris play cello on some of the songs, and we had been working with him since 2012, so it felt pretty tight-knit doing this album, to be honest. The only person that helped in songwriting on this album would actually be an old member, Ian Jekelis, on the song The Final Failure.

"Originally it would’ve been on the last album, but it didn’t fit with the other songs musically, and I figured it was too good not to include on this record even though he hasn’t been in the band for years now. I think it honors the time he spent with us nicely."

You've been touring with the Faceless – has this taught you anything, or influenced your songwriting for this record?

"I quit the Faceless over a year ago now, and though it didn't influence my song-writing at all, I definitely would say it taught me some things about how or how not to run a band.

"I still value some of the time I spent with that band, and the great guys that I played with who were very talented."

-Where have you taken your primary influences for this album, musically?

"It’s hard to say, honestly. I don’t listen to a whole lot of metal, and when I do it’s usually some classic stuff like Judas Priest or something.

"I hear some stuff here and there that I like, but I find it really hard with my schedule to keep up on what’s new and I try to purposely not listen to things sometimes so that I’m not influenced too much, actually.

"Some of these songs I’ve had kicking around for several years, and some of them were written last minute right before recording. I wrote over 20 songs for this album and ended up just using the ones that I thought fit the best together."

How about lyrically? What themes does the new record tackle?

"Usually when I’m writing lyrics, it’s very stream-of-consciousness style. I’ll usually sit there right before I have to record the vocals for the song and start writing words, and then when I read them back I'm either pleasantly surprised, or I try again.

"I’ve never been one of those guys that has a theme for the record lyrically, at least not in the way that some bands do. I usually just write until it makes me feel a certain way, and then see if it fits the song.

"Lots of personal stuff usually makes its way into the lyrics, but I like to leave them open for interpretation."

Why did you pick I Will Depart as the first single? Can you tell us more about this particular song, what influenced it and the songwriting process?

"Honestly, I think I picked it as the first single because it’s the first song on the record and I couldn’t really decide which song people should hear first, because each song has its own unique vibe that, together, make the overall mood of the album.

"That was one of the last songs that I wrote for the album, and I think I was just looking to write a song to open the album that had elements that fans of the band both old and new (which are usually different groups of people) could recognize before diving into the rest of the record."

Abigail Williams' new record Walk Beyond The Dark drops on November 15 via Blood Music and is available to pre-order now.