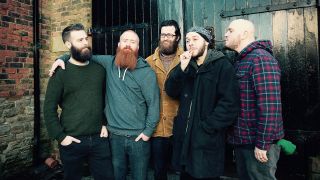 "After Herb Your Enthusiasm, we wanted to expand our sound and we wanted to push ourselves creatively," says Boss Keloid drummer Ste Arands. "Having Matt Milne join on keys, and Alex (Hurst) pick up his guitar made a big difference to both our sound and the way that we write. When we work on something now it tends to develop a lot more organically, and we're a lot quicker to say when something just sounds crap. We're all very open when it comes to what we like and don't like, but we also try to be open to trying anything once at least."

Ste is talking, rather enthusiastically about his band's new album Melted On The Inch, which is released April 27 through Holy Roar Records. It's an album that transcends stoner metal into doomier, proggier and more mind-bending territories. Hammer's own Dom Lawson described the record as "one of the best things that's ever happened."

"There was an expectation, I think from all of us, that this album would turn people right off us after Herb had such a positive reception," continues Ste. "There were sometimes conversations when we were writing about things potentially being 'too silly' or 'too happy', as Herb was the heaviest we'd ever sounded, and we sometimes went in completely the other direction while jamming on this. Inevitably, though, we've never done this to make money – it's only ever been about pleasing ourselves and writing what we want to hear. Any success is a bonus!"

You can listen to Melted On The Inch in its entirety below. In fact, while listening, why not read Ste's track-by-track guide to the record too? Breathe it in...

"I'm pretty sure the lyrics to this one were written by Paul (Swarbrick, guitar), with just a dash of Alex for good measure. It's all about overcoming personal barriers, and not being afraid to start from scratch once in a while or make positive changes in your life. The realisation that life is a journey of both ups and occasionally shit-sandwiches, and dealing with that positively is important. The Paul Swarbrick McMulti-Riff is showcased here at the 3:50 mark. Uncle Crow has us all perplexed weekly with his unique, twisted riffery, and this one was a right bastard to get right. I'm glad we did though – I think the heavier bit in the middle sounds great."

"Alex says that Tarku has a kind of motivational theme, and is about the benefit of being able to motivate yourself, and face whatever life may throw at you. He told me it's about, 'Giving yourself a kick start from the moment you wake up.' This one is my personal favourite to play, and I love the way the keys turned out on it."

"Pekyruve carries a lot of emotional weight behind it for us. The song and lyrics are dedicated to the late Leon Murphy. He was a lovely guy, friend and fellow local musician. He was a young guy who struggled for a long, long time with a brain tumour but dealt with his illness in a truly inspirational manner and kept on living his life and playing his music. The words he spoke to Alex one time; ‘Positive thinking is the only medication that you need,’ are the lyrics in Peykruve. He sadly passed away last year when his illness eventually took over. Dynamically and lyrically, this song is one of the most powerful that we’ve written."

"I had already recorded the percussion track that we used on the intro at home, but the original recording is about 20bmp slower. I had a bag-for-life full of all sorts of percussion with me at the studio – claves, wooden frog, sleigh bells, the usual – and intended on re-recording it once we had the rest down. Chris Fielding played around with the recording and tried speeding it up – it sounded cool so we used that. As always, Chris was awesome to work with and was invaluable from the start. The Neve desk (mixing console) there had just been serviced, and we couldn't have been happier with the sound Chris got through it. The drum sound especially I thought was a step up from Herb. This one is about facing up to your own demons and trying to find peace in the most unexpected places."

"Without going into too much detail, Lokannok is about the idea that it can be easy to get stuck in a rut and end up living a lie. It's about not letting anyone or anything hold you back or sacrifice your potential for happiness or progress. Life is what you make it. We played this song for months in a vastly different form and could never get it to feel comfortable. At some point a few months before recording we decided it was terrible as it was, and ended up cutting about half of it out. We worked with what we had left, and ended up with this version."

"This one is about dealing with the disparity between what we're told about the world and our place in it, and reality. It's also about the pressure society places on people with regard to how they live their lives, and realising that thinking for yourself and making your own mind up in a world that doesn't want you to is always commendable. The section that starts around the 3:50 mark is something I always enjoy seeing Paul and Al play. They did a good job with those parts, and getting them to fit around each other like that."

Boss Keloid's new album Melted On The Inch is available to pre-order now.