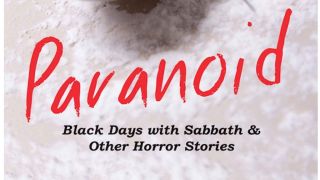 Mick Wall is the world's leading rock and metal writer. This week one of his most celebrated, and controversial, books is being being published in a new, uncensored edition via Kindle, so we asked him if he'd tell TeamRock about its genesis. And what a story we got...

Iggy Pop once told me that what he called “the Christ-age” – that is, 33 and a third – was the most important moment in a guy’s life because, as he put it, “you either die or you ascend to heaven…” Then looked at me and added without smiling – “… or to hell.”

Iggy was right. At the time I wrote Paranoid, I was 39 and had been living in hell for six years. Ever since I’d walked out of the game called fame and hung up my rock writing boots for what I was determined would be the very last time. Man, I was done, you know?

Done with bleating rock stars – take it from me, get to know one really well (hi, Axl), you’ve got to know them all – done with PRs more concerned with crawling up their clients’ arses than actually doing their jobs. Done with record company nitwits trying to sell me their shit as though it was gold.

Most of all, done with myself. Between the ages of 19 and 33 I’d done nothing but write about and work with rock bands. In print; on TV; on the radio; in the bath. (That is, when I wasn’t dishwashing or on the dole.)

Dude, I’d monkeyed with them all. Snorted gear off Phil Lynott’s plectrum; woken up in bed drunk with Steve Clark; helped Ozzy cook Sunday lunch; had a shit and wiped my hands on the curtains at Lemmy’s; shagged [FAMOUS ROCK STAR]’s wife while he slept in the next room. I’d even been onstage with some of them (Iron Maiden, Marillion, Dread Zeppelin…) and made an album of my own (don’t ask).

And what had it all taught me? Only the deep, dark stuff; the nasty shit that leaves the stains that never wash off. Very little of the joy we imagine as teenagers sitting on our beds listening intently to the latest masterwork from one of the superhumans that made albums.

At least, that’s how I viewed it at the time I wrote Paranoid. By then, I was on the outside, but no longer looking in. Things that had amused me with wrigglement at 25, made me twitch with nausea at 35. And I was bitter. Joe Elliot, Lars Ulrich, Slash, Jimmy Page… all my so very close friends that I had given my days and nights to for so very long were now living somewhere over the (Hollywood) hills and far away (from wherever I was).

And I was broke – I have always somehow managed to be broke, it’s just a matter of degrees – but this was serious now. I literally had nothing. Not a chair to weep in, not a bed to wank on. I was friendless and without glee. So I had decided to write the rock book to end all rock books, the one that came clean finally, because I was clean finally and could see at last what I thought there was left worth seeing.

Ooh, I was gonna tell it. Bam! Fuck you very much.

And, well, I did. At which point something changed – something died and something was born or reborn, depending on whether you’re Hindu or Hullabaloo – and like a snake shedding an old stinky skin, I found the lonely tin I’d been floating in for so long suddenly re-entering earth’s orbit. And at great speed.

For between finishing Paranoid and getting married (the very next day, bizarrely), a new magazine was about to draw breath, like a premature birth, soft and whiny and just a little bit too early, but here nonetheless so now we’d all have to deal with it – called Classic Rock. The older-offspring of an already established magazine I’d also work for called Metal Hammer.

And that was it: new leaf, new planet and, best of all, brilliant new rock mag.

I thought, “Shit! Is it too late to stop them printing that fucking book? If they read that I’m fucked!’