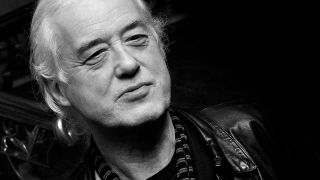 After performing what can only be described as the reunion of the decade in 2007, it seemed that everyone from Stephen Fry to Paul McCartney and Sigur Rós came out of the closet to declare their unconditional love for Led Zeppelin.

Apart from the obvious, what made this monumental get-together so special is that it wasn't pulled together by the lure of filthy lucre or some condescending, world-saving crusade.

The reasons were twofold. First and foremost it was a nod of respect to Atlantic’s founding father Ahmet Ertegün (the money raised went to a school foundation set up by his wife). Secondly it was a chance for Zep’s surviving members to show a new generation what the fuss was all about. As Robert Plant declared: “We need to play one last great show.”

And what a show it was, a sublime trip through their classic tracks, proving without a doubt that Led Zeppelin were the greatest hard rock band ever.

Before the concert took place, we sat down with Jimmy Page and asked him some questions.

The obvious question is, why did you decide to have the Led Zeppelin reunion now? Why now?

Hmm, I guess there was the clarion call with the tribute to Ahmet and for the charity that’s been set up in his memory. [Because of that] really it was a question of any time, any place. Originally there was talk of doing it at the Albert Hall. Then we thought we’d get together in a clandestine location to see how we all got along playing together.

That was really good, but before we even got in there it was leaked that we were going to do the O2, whether we were any good or not! [Laughs.] But we had a really good time during that initial rehearsal with Jason. And then we had another get-together to pick over the numbers that we’d do relative to a set.

Originally it was proposed that we’d do an hour, but there was no way that we’d do only an hour. So that stretched to 75 minutes, then 90 minutes and beyond. By that point we were going to make a joint statement, then it got leaked again. So the expectations are accelerating, but it’s okay. We’ll be rehearsing all the way up to O2.

Speaking of the rehearsals, how are they going?

With attitude! One of the things we agreed on was that if we were going to play together then we’d put as much into it as we possibly could. There had been a couple of previous get-togethers like Live Aid, which involved a couple of hours’ rehearsal in one of the dressing rooms with a drummer we’d never played with before, and then getting on stage with another drummer we hadn’t played with. It was totally shambolic. So this time it’s important that we’re well prepared.

When you did Live Aid in 1985 it was quite a risk for you to undertake. You hadn’t played together in a while, you had no control over the environment and only a short set.

I think we came together in the spirit of Live Aid. At the time Robert was out on a solo tour and I was probably out with The Firm and it was a bit of a wing and a prayer. Sometimes those things can be a glorious success or it can be a glorious shambles [laughs]. You have to understand other people had taken it on properly, rehearsed and it showed.

Once you had the idea was it easy or difficult to pull this reunion together? How did you get back to achieving that state of equilibrium?

Well, the key to it was actually getting in a room together, playing together, going through a number and just getting the feel of the whole thing. That was the purpose of the first rehearsal, to see how we would all get on. There’s that camaraderie, if you like, that we had, but there’s been a lot of water under the bridge.

It was really important to see how we would all get on. But the key to it is the music, because the music is so powerful. You have to throw yourself into it, the way you might throw yourself naked into a bed of stinging nettles. It’s a commitment.

With his son behind the kit, what do you think John Bonham would make of this reunion?

He would absolutely be so proud of Jason. In rehearsals he has such an infectious enthusiasm that it’s undeniable. The most important thing that you must never forget is that John Bonham loved Led Zeppelin’s music.

There have been various petitions online calling for a selection of drummers including Dave Grohl to play. Did you ever consider anyone else for the job, other than Jason himself?

The thing is that Jason’s more than proved himself as a musician in his own right. We played together before. He was on my solo album and toured with me in the 80s. He’s come into the situation as Jason the man as opposed to Jason the kid and he’s certainly playing in that capacity.

Don’t forget Jason appears on The Song Remains The Same and he appeared with us at the Atlantic Records 40th birthday bash and he played remarkably well. So within the framework of Led Zeppelin material there’s no other choice. In fact it would be insulting not to do it with Jason. He more than measures up.

The current target is the gig. I mean, of course, everybody’s projecting this, that or the other and there was a massive demand for the O2 show.

Were you surprised by that?

I knew it was going to be big, but this was more overwhelming than any of us could have guessed.

Were you surprised by the warm response from musicians and the media?

No, because the music was always well crafted, from the first album on. The albums and the live shows are two different aspects and facets of Led Zeppelin. But it’s the albums that people are more aware of because when was it we did our last proper show, 1980? So there’s certainly a young audience out there who like Led Zeppelin and want to experience the band in a live setting.

Has it been difficult picking material?

Not really. Not at all, actually. But I’m not going to tell you what the set list is [laughs]. There are a lot of people who really want to see you perform but aren’t going to get the opportunity.

Are you going to at least film or record the show?

I’m not sure about that. The most important thing at the moment is to play this gig with the spirit that it deserves.

It might seem that while John and Robert have been pursuing solo careers, you‘ve concentrated on protecting the Zeppelin legacy with a series of remastered albums, compilations and the expanded version of The Song Remains The Same. Is that accurate?

Absolutely right! As far as Led Zeppelin is concerned I’ve been very keen on making sure that things are right – taking care of the legacy, making sure that all the live material came out; like How The West Was Won, and pushing to get The Song Remains The Same out on a DVD of a high standard.