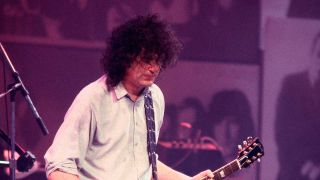 Chris Salewicz's biography of Jimmy Page tells the story of the iconic Led Zeppelin guitarist, from his days as one of the 1960s' most in-demand session musicians to his tenure pulling the strings of the world's biggest rock bands.

Jimmy Page by Chris Salewicz is out in paperback this week.

On 14 May 1988 Atlantic Records held its 40th anniversary show at Madison Square Garden. At the time Robert Plant was touring the USA, promoting his Now and Zen album. Ahmet Ertegun personally asked Plant, who continued to be released through Atlantic, to play the event. But he also asked all concerned if Led Zeppelin could reunite to close the evening.

Amazingly, they agreed. Even though Plant appeared to be constantly closing off such a possibility, there was a side of him clearly still open to the Zeppelin journey, a journey that seemed increasingly one of the soul. And, all things considered, who would be surprised by that?

The Atlantic Records 40th Anniversary Concert was broadcast live in the US on a simulcast between FM radio and HBO television, an enormous promotion. Plant performed a well-rehearsed, well-received solo set, following Crosby, Stills and Nash, the Bee Gees and Yes.

But the night before the show Plant and Page had had words about Led Zeppelin’s concert-closing act: the singer had wanted to use his new drummer, Chris Blackwell (no relation to the Island Records boss); but Page was adamant that Jason Bonham be employed, arguing, not unreasonably, for a Zeppelin bloodline continuance. Also, Plant had refused to perform Stairway to Heaven, although – again – he changed his mind under pressure from Page.

"Well, that was awful," Page said to Mick Wall. He told him that Plant "came together with Jason, Jonesy and me in New York, where we were rehearsing, and started singing Over the Hills and Far Away. And it sounded really brilliant, actually. Then we rehearsed Stairway and that sounded great, too. Then the day before the show he called me up that evening and said, 'I’m not going to sing it.' I said, 'What are you talking about? You’re not gonna sing Stairway? But that’s exactly the one thing that everybody expects to hear us do!' He said, 'I don’t wanna do that!”’

The time-honoured view of the show is that it was a shambles. Yet it is easily available on YouTube, and watching its full 32 minutes, it is eminently clear that this was not the case.

Moreover, everyone seemed very happy after the performance. It seems a measure of the full extent to which the tide of popularity had receded for Led Zeppelin that such dismissiveness has become the established currency of how this show was. Especially in comparison with some of their performances on the fated 1977 tour, it really wasn’t a disaster at all. But there was something else hovering over the participants.

"I had a strong feeling that the way the Atlantic thing went put a Zeppelin reunion on the back burner for him,’ said Doug Boyle, Plant’s guitarist. ‘Before it I thought there might have been something happening a couple of years down the line. I don’t know what went down but that gig was a very tense time between Robert and Jimmy.

Although certainly not evident during their time onstage at Madison Square Garden, the psychic tussle between Page and Plant over Stairway the previous day had depleted the guitarist.

Afterwards, he told Mick Wall, "I didn’t really sleep that night. I was jetlagged anyway because my son had just been born in England and I’d left within a few days of that. And I was really on a roll from that, you know, the high that you’re into after the birth of a child. And all of a sudden, I plunged to the ground!

Jimmy Page by Chris Salewicz is out in paperback this week.