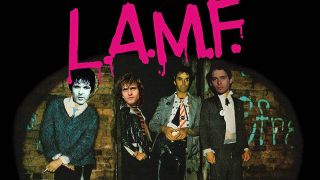 L.A.M.F. is one of the great New York albums. Alongside the debut recordings by Richard Hell & The Voidoids, The Dead Boys, Blondie and The Ramones, it sums up the spirit of CBGB and the scene that spawned American punk; equal parts spiky, streetwise smarts and superior pop nous. It’s an album that includes five bona-fide classics in Born To Lose, All By Myself, Chinese Rocks (written by Hell and Dee Dee Ramone, it was later recorded by The Ramones on their End Of The Century album), Get Off The Phone and One Track Mind.

The album should have been an instant hit, but there was a problem: it sounded terrible. It was was actually recorded in London after the band had flown in to play on the Sex Pistols’ shambolic Anarchy tour, but the mixing process was a disaster as the band, their critical faculties dimmed by drug addiction, produced an album that was muddy and failed to capture the well-oiled ferocity of their live shows.

There have been several attempts to resuscitate the album in the years since, with reissues that have tried to defibrillate the recordings and return them to their original lustre: L.A.M.F. Revisited came out in 1984, L.A.M.F.: The Lost ‘77 Mixes surfaced in 1994, while L.A.M.F.: Definitive Edition added to the confusion in 2012.

It’s out now. And below, original Heartbereaker Walter Lure takes us through the set.

Born to Lose
The band is moving well even though Tommy sounds a bit delirious in his singing. Wayne does a good solo.

Baby Talk
The intro comes out like a jackhammer and keeps going, however Tommy is singing the wrong lyrics in the choruses. The whole band sounds like a drunken boat sailing thru a hurricane.

All by Myself
Starts off good although my voice sounds a bit raw as the song progresses. The whole band sounds like a tractor smashing thru a row of houses.

Wanna be Loved
Jesse’s voice sounds a lot better that Tommy’s but Wayne forgets to do a solo in the middle. The entire band screws up and plays a double chorus in the middle but no matter, it still sounds like an 18 wheeler speeding down the highway.

It’s Not Enough
Jesse sings it good but my solo gets a little lost in the middle and I wasn’t given a chance to fix it. Song comes off well though.

Chinese Rocks
I saw the video and thought it was great. I’m still laughing during the song and making up obscene lyrics. Wayne seems to be having a great time as well.

Get off the Phone
My voice is really getting raw in this one. The band is really loose and sounds like another voyage of a drunken boat.

Pirate Love
I have no idea what Tommy was saying at the start but Wayne sounds good on this one. The bass sounds like a Truck tire and the rave at the end is a little short. Still it’s a great raw mess.

One Track Mind
My voice comes out good on this one and Wayne does a good solo but lets it go on too long. However the band is really moving like a demolition derby on steroids.

I Love You
Starts great out of the box. The vocal by Liza Colby also sounds great. Wayne comes in late on the solo but no matter, the band is really moving at light speed here.

Going Steady
Cheetah singing comes off well which was surprising since he missed the rehearsals. Wayne does too many solos in the middle mess. The band moves well but trips up in spots.

Let Go
The band kills it on this one and Wayne sings well and does a good solo. The band keeps moving like a mofo but crashes into a wall at the end.

Can’t Keep My Eyes
I sang the original but Clem wanted to sing it because he only heard the later version with Jerry’s vocal - no matter, he sings it well. Wayne does an extra solo in the middle which got stretched out a bit too much but there’s a great rave up at the end. The whole band sounds like a grind house killer.

Do you Love Me
Wayne sings it good but I can’t believe we sang the wrong notes in the backing vocals as well as bad lyrics. We also didn’t have the high note in the chorus but no matter, it’s still a delightful mess!

So Alone: The Johnny Thunders Story