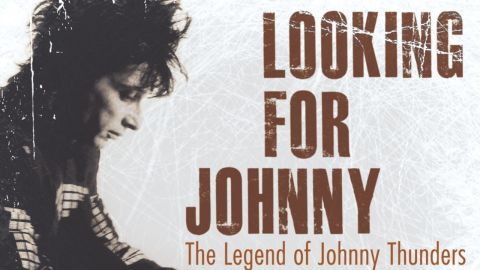 Looking For Johnny is the soundtrack to the recent documentary about the late New York Doll who took Keith Richards-style heroin chic to the extreme before dying, aged 38, in 1991. “He was always at war with himself emotionally,” declared Thunders’s biographer Nina Antonia, who provides new sleevenotes for this release, finally on CD after a limited-edition red vinyl release last Black Friday.

The album features 30 tracks and 90 minutes of music, including several rarities and exclusives. The music runs the gamut of Thunders’s career from his pre-Dolls days with the blink-and-you-missed-‘em Actress, through his stint with The Heartbreakers, and onto his solo work.

The final seven tracks – or side four if you bought the vinyl – comprise songs from such collaborators and contemporaries as Vic Goddard of Subway Sect and Jan ‘Nasty Suicide’ Stenfors of Hanoi Rocks.

Stenfors (and the glam-metal genre in general) was one of many influenced by Thunders, although it could be argued that his impact was more for his degenerate junkie credentials than for any stylistic qualities or musical chops. Then again, there are those – and his former Doll-mate Sylvain Sylvain is one of them – who believe he was one of the all-time rock’n’roll greats, both as a guitarist and as a songwriter.

Most of the evidence for the latter, however, is on that epochal first Dolls album. Born to lose? Maybe. Still, diehards will consider this a trove of debased delights./o:p