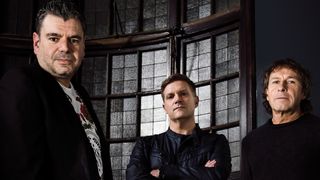 There’s a full interview with the band in the next issue of Prog, which is on sale April 5. But for now, the mainmen of the band, Messrs. Mitchell and Trewavas, guide us through the new album, track by track.

JM: This was the first track I wrote for the new album. I always loved the title Cabaret Voltaire but you can’t really nick another bands name for a song title can you? Voltaire was the name of a French Philosopher who was around several hundred years ago. This guy was quite anti-establishment and opposed to quite a lot of social injustices (such as slavery) at the time. Instead of chopping his head off, they exiled him to England which anyone from France might think is punishment enough! The song is about a fictional radio station with no political agenda with only one remit, broadcasting the truth.

JM: This is a parody song. The groove was Craig basically doing what he does for 3 minutes at that tempo and then me chopping it up and creating a song around it. I wanted it to sound like Grange Hill goes electro with Bugsy Malone thrown in. It’s about people so desperate to be famous that they will literally go to ANY length and walk over anyone towards that pursuit.

JM: Is a song about people saying their goodbyes at airports. People seem to get overly emotional at airports, sometimes excessively so The title is what the airport John F Kennedy used to be called before it was named in his honour. There are 6 versions of guitar solos recorded and that one made the cut. Normally I just settle on one.

I DON’T KNOW WHY

PT: This is a kind of Jellyfish/Queen inspired song which I wrote just towards the end of the first Kino album sessions. It was just too late to be on the record but I remember playing it to John Mitchell while I was round at his finishing things of. At the time I expected it to be on the second album and all these years later, here we are.

I WON’T BREAK DO EASILY ANYMORE

JM: Is a song that is about not being able to leave a dysfunctional relationship. We’ve all been there right? It channels the Who and Jellyfish in equal measure. I always wanted to put a harpsichord in a song and this is the third time that’s happened. I remember not being able to talk for a day after singing the last note on the song. One suffers for one’s art right?

JM: Despite my apparent hatred of acoustic guitars I thought it might be nice to write a folky song about ye olde England on one. It’s actually about people’s antiquated view of an England that doesn’t really exist any more and are borderline racist in that defense. Ridiculous in 2018 really.

PT: Out Of Time was written during the time we were working on the backing tracks for Radio Voltaire. I came up with the idea while at home working on harmonies and the next day I started arranging it in my head on the drive between my home in Aylesbury and John’s Reading. I’m lucky in that I have a pretty good understanding of what’s going on musically without needing an instrument around. I played it to John when I arrived and he thought we should get it recorded and see how it fitted in.

WARMTH OF THE SUN

JM: A short ditty about lying in the grass and staring up at the sky. It’s full of whimsy and why not? Summer is coming people!

JM: This is a song which alternates between 5⁄4 and 4⁄4 and features my best Imogen Heap impersonation in the verses. It’s about the fact that sooner or later all the green will be gone and all that will remain is Grey Shapes On Concrete Fields. You can find a bitter beauty in anything if you look hard enough.

PT: Keep The Faith is inspired by a period my oldest son Callum went through in his teens where he suddenly woke up to the realities of the human effects on the planet and what we put each other through during wars and dictatorships etc etc. We all go through that political phase I guess. It was a simple Lennon style thing trying to show that nature and time are very good at balancing things out. In a lot of situations.

JM: The title was conceived by Paul Tippett, the head of the art department at Mitchell towers. It’s about the last few minutes of a pilots life before his time is cut short. It’s more about the futility of that situation and how so many people lost their lives in a situation not of their own making. This was the last song I put together for the album and probably my favourite song that I contributed. The sound design on the front is an actual Spitfire.