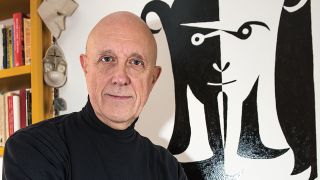 Since he co-founded Van der Graaf Generator in Manchester in 1967 with Peter Hammill, Judge Smith has been rather busy in the intervening years. In addition to appearing on Peter Hammill’s In Camera and providing material for Nadir’s Big Chance, he also contributed the libretto for Hammill’s The Fall Of The House Of Usher project. Smith has also written various musicals for the stage and as well as having worked in television, he’s also penned books on the supernatural. Something of an intrepid musical explorer, he’s released 12 records including a concept double album about the age of the airship. His latest release, Requiem Mass, was written for a 50-strong choir, an eight-piece brass section and a rock band and is his most ambitious work to date.

Where did the idea to write a requiem mass come from?

I’d got the bug for writing long pieces when I was in Van der Graf Generator but I wanted to write something for myself. I’m not at all religious but the structure and the fact that it was in Latin appealed to me. It was a crazy thing to do because it demanded a big choir with four trumpets, four trombones and a four-piece guitar band. It was quite impossible, really.

You wrote the piece back in 1975 but only managed to record it recently. Was that frustrating?

Well yes, but the recording was amazing and working with the Crouch End Chorus, who are the go-to choir for people like Ray Davies and Noel Gallagher, was incredible. They’re used to rock music and they liked what they heard and agreed to sing for me. I attended one of the rehearsals in a big church in North London and it had been so long between the writing and actually hearing it performed, that I’d forgotten some of the pieces. I just found it very emotional finally hearing it sung by a big choir! They sat me in a seat on the altar steps and I teared up when they started singing. One of the ladies in the choir came up to me afterwards and said, ‘Yeah, that’s what we do. We make grown men cry.’

Did you have any trouble recruiting a rock band to play the Requiem?

I had John Ellis who used to be in The Vibrators, and has worked with Peter Gabriel and was also a member of the K Group with Peter Hammill. But I also got help from Daf Lewis, a bass player in the West End musical scene; he put the band together. These players are really good. They can read music standing on their head but that didn’t stop them coming up with wonderful suggestions and trying different things like you would get if it were a regular rock band. The fact that they were so adept meant that I didn’t need a long rehearsal period and I was able to record the backing tracks in a couple of days. I was also really lucky to have the soloist, baritone Nigel Richards, who also comes from the London Theatre world. He was Phantom Of The Opera in the West End, and did a fantastic job, a wonderful voice.

It was. We recorded it in Mark Knopfler’s place, British Grove Studios. We did it there because there’s 50 of them, so they’re not going to fit into my home studio! It was very grand, and it was by far the most high-end studio I’ve ever recorded in. It cost a great deal of money but we got a wonderful recording from it.

Your concept album, Curly’s Airships (2000) was about the Imperial Airship Scheme and the R101 disaster of 1929. What’s the fascination for you about that period generally and airships in particular?

I think it’s the surreal image of them. They were gigantic structures floating in the air. It’s like the Royal Albert Hall floating overhead. It’s that aspect of the airships which appeals. I’ve always liked the inter-war period, the 20s and the 30s. I like the slang and the language and the attitudes that you find in the literature and the history of that time. I wanted to write another long piece and Curly’s Airships was two hours and 20 minutes long.

I sometimes wish I could just roll into a studio with a guitar or something (laughs). Curly’s Airships took about seven years, and involved traipsing a half-inch 16 track reel to reel around. There are some extracts of Indian music in it and I had the offer of the right sort of musicians in Holland but in order to get there, I had to pay my way by giving a lecture to the conservatoire in Utrecht and thus be allowed to use their studio to record the Indian music.

Who are your influences as a writer?

I think over the years it has to be early-period Hammill definitely. He’s an unbelievable composer. And Zappa. I don’t like all of it but who could – there’s so much of it. One of the things I’m proud about is that my stuff doesn’t sound like Zappa and it doesn’t sound like Hammill. I think if you can hear your influences in the music then you haven’t assimilated the stuff well enough.

You started your career at a remarkably creative period in the 60s.

Yes it was but the thing about being there, being in London at the time, well, it always felt like there was a great party happening somewhere that you weren’t invited to. With Van der Graaf Generator we were making very peculiar music not particularly well played. We got a record contract because the record companies didn’t know what was going to make money, and seeing weird music being made, they thought, ‘My goodness, we better get weird.’

Requiem Mass is out now. See more at www.judge-smith.com