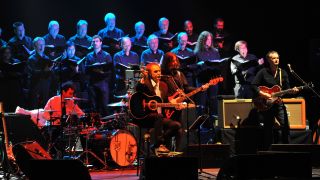 It's a fresh, yes, sunny afternoon in North London when Ray Davies greets Classic Rock at his local pub. It's almost too emblematic to be true. Opposite lies a verdant village neatly framed by the local church. This particular sweep of the capital has been Davies's manor all his life, serving as a platform for the momentous, acutely observed songs he wrote as leader of The Kinks - Waterloo Sunset, Victoria, You Really Got Me and beyond - as well as his more recent solo albums. His latest project is The Kinks Choral Collection, 15 old Kinks classics re-recorded in rock-choir mode with the Crouch End Festival Chorus.

Is the new record your way of making the old Kinks songs interesting again for you?

No. I tried to be experimental and pick music that would be fitting. It was about doing things in a more interesting way. Waterloo Sunset does more than the original. It’s just really nice standing in front of that choir and singing it; like writing You’ll Never Walk Alone and standing in front of the Kop. You could say Waterloo Sunset is sung by the people it was written for.

How did you decide which songs to do?

We started off with more obvious ones, like Shangri-La. But we didn’t do Dedicated Follower Of Fashion, which was one of the ones we’d done at the Electric Proms in 2007. I didn’t want it to be jokey, but it’s one I regret not putting on. Then the arrangement on You Really Got Me came out as something quite spectacular.

You Really Got Me is often cited as the first heavy metal song.

It was on the way, but there was no spandex involved. It was more jazz-blues than heavy metal. More directly akin to heavy metal was All Day And All Of The Night. If that was made today, it would sound like Green Day or a metal band. We really cracked it with that. People have told us as much over the years. But it hasn’t stopped them from ripping us off.

The popular perception of you is as a wistful, very English singer-songwriter, but The Kinks began as a hard-edged R&B band.

I still like hard rock – I veer to the hard side, rather than this subtlety. When I started writing songs, lyrics became very useful ammunition. I say ‘ammunition’ because I use a lot of war-like words. Songs like [1968’s] Johnny Thunder, about one of my heroes when I was a kid, is very hard-edged. Those songs have hard centres in a soft shell.

**You and your brother Dave were once lined up to play 60s London gangsters the Kray twins in a biopic. Is it true Ronnie and Reggie Kray once wanted to manage the band? **

Yeah. Our managers at the time were middle-class stockbroker types, with an office in Carnaby Street. One day they had a visit from someone from the Kray organisation, saying they were very interested in managing The Kinks, who they felt akin to with the music. The also asked whether [drummer] Mick Avory would be available to go out on a date. It wouldn’t have been beneath our managers to strike a deal; the mind boggles. [In 1998] I did London Song for The Storyteller album, which mentioned the Kray twins, and my agent received a phone call from Her Majesty’s Prison saying how much the surviving Kray liked it.

**The Kinks were also invited to the house of notorious serial killer John Wayne Gacy, after you played a gig in Illinois in 1966. **

I didn’t stick around, but I think Pete Quaife [bassist] hung out there. I don’t know what the guy claimed to be at that time. You’d meet a lot of people like that, hanging out with promoters. That could have been a potentially scary time. I’ve worked with a lot of dodgy people in my time, without knowing their connections.

In the early 70s, when many of your peers were playing arenas, you opted for album concepts based on music-hall theatre.

My one regret is not seeing the Preservation project [1973] through. I still think about that now. The lyrics to Money & Corruption – ‘Crooked politicians/Betray the working man/Pocketing the profits’ – could be about what’s been happening lately [with MPs’ expenses].

Touring that Preservation show in the early 70s, we did all the hits in the first half, then segued into this hour-and-a-half rock musical. Audiences were in complete shock. I was playing [capitalist dictator] Mr Flash, then there’d be these rear projections on screen of somebody else [Davies as the sinister Mr Black]. [Laughing] I think psychiatric wards are still full of people who were in that audience.

What’s the latest on the Kinks reunion?

Well, I’m going to do something with Mick Avory and some of the other surviving members. That’s a certainty. Whether it’s involving my brother or not is really down to him. The invitation’s there. Have I heard from Dave at all? No, he keeps a fairly low profile. It would be nice to do it, but I’d only do it if there was new music there. I couldn’t just do the reunion thing. I might cut my throat if I had to do that.

I think I still would do things differently because this way hasn’t worked. I would have done something where I’d have had more control over what I did. William Blake, for example, was an engraver who coloured his own pictures and illustrated his poetry. I maybe would have written more and painted more. But then, you know, I’m me and I’m stuck with it. [Laughing] If I did it all again I’d be an attorney.

One of Blake’s images is on the sleeve of your new album. Is he someone you identify with?

I’ve always really admired his imagery and his iconic use of things. If he were alive today he’d probably be making his own videos.

I just thought some of his images were fitting, a slightly mad take on things. To do anything vaguely different these days you have to be considered mad. And most people think I am. But to make those big, exalted moments you’ve got to be a little bit cranky.

FIVE RAY DAVIES SONGS WHICH WERE HITS WHEN COVERED BY OTHERS