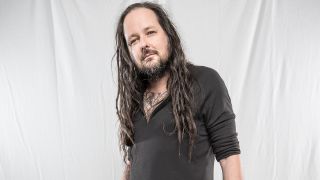 Perhaps more than any other prominent band in the genre’s history, Korn recklessly fucked with the formula for what can still be represented under the metal banner. Having already spearheaded the entire nu metal movement in the 90s, the Boys From Bakersfield famously mixed it up once again with 2011’s The Path Of Totality, bringing in a host of big-name dubstep DJs to create another new take on the sound. Is metal due another big musical shake-up? Jonathan Davis weighs it all up for us.

How do you feel about the way heavy music has evolved since you started your career with Korn nearly 25 years ago?

“I feel fucking great about it. It’s been amazing. I love that we were part of something that showed up-and-coming musicians that you didn’t have to go out and play traditional heavy metal music or traditional rock music, and that there were different ways to do it. After the early 90s, all these crazy subgenres of metal popped up. For me, our music has always been about experimentation and doing something different every time. That’s what Korn has always been about. Obviously we go back and we touch on things we did in the past, but we have always wanted to push forward because it’s challenging. If you’re a musician, you shouldn’t want to do the same thing over and over again. It works for some bands, I guess, but not for us. Looking back and seeing how everything has evolved, it’s been amazing to be involved with that and watching all these subgenres popping up. It’s fucking awesome.”

Do you think there’s a danger that people will run out of credible things to mix with metal?

“It’s up to the listeners to decide what works and what doesn’t. All these bands can do all kinds of different hybrids but kids have bullshit detectors and they can hear if it’s for real or not. You win some and you lose some. Some bands can do it and take off, and others have no success at all. All you can do is try to do new shit.”

Is evolution essential to keeping the metal scene alive?

“Yeah, I think it is, but I also think metal evolves naturally. I like the fact that it keeps evolving. It needs to evolve because when I hear all this new shit, it excites me as a fan. I get really excited when I hear something totally cool or different. I’m always waiting for that. The old-school metal thing, that’s always gonna be there because it’s about a lifestyle and not just the music. But I like to hear as much cool new shit as I can.”

Do you think community and tribal loyalties are still important in the metal scene today?

“It was super-important when I got into this, for sure. It was super-competitive in the early 90s. With us and Limp Bizkit and Deftones, the bands had to pull together and do everything we could to break this shit big. Pop music was dominating everything but we all pushed together and tried to build a scene. That was really important and I hope that’s still happening.”

You’ve always embraced technology as a band, but how do you feel about social media?

“It all makes me sick. This generation now makes me want to fucking puke! Ha ha! Everybody’s constantly staring at their cellphone and they’re on social media, taking videos of shows, instead of enjoying life and enjoying music. There’s no gratitude for the effort and passion that the artists put into their music, because it’s all just expected. Kids get everything instantly so it’s all instant gratification and then onto the next thing. Everything’s too easy and available and kids’ attention span has gone. It’s fucking horrible. I know I sound like my grandfather when I say this stuff, ha ha!”

Do you think the fact that a lot of young fans are discovering vinyl will make a difference?

“Well, that’s what I do with my kids. I sit ’em down and we listen to an entire album. We need to keep that going on! That vinyl experience was such a big deal for all of us growing up. I want my children to know how we did it back in the day. There’s something ritualistic about picking up a record or a CD and putting into the player and looking at the artwork and actually holding something. I miss that ritual but it’s starting to come back. I sign more vinyl records at shows than anything else, so I think there’s a light at the end of the tunnel.”

Are you glad you didn’t start your career in the 21st century?

“Yes! These days you’ve got to deliver over and over again. You’ve got to be constantly doing something insane on social media. It’s not like the old days when we had magazines and MTV. These days it’s all about how many fucking followers you have and it fucking sucks… but that’s just my opinion. It’s a necessary evil, I guess.”

Will the President Trump era bring us lots of killer angry music?

“I’m expecting lots of angry-ass music. How could it not cause that? It’s a totally ridiculous situation.”

You’re known for keeping your finger on the pulse, so what’s next for heavy music?

“We’re just waiting, man. We’re sitting here and just waiting for that thing to happen. Personally, I’ve been really getting into and listening to old-school funk and shit like that, and I’m just waiting for some heavy stuff that has that spirit. You’ve just got to keep your ear on the street, man. That’s what I do. The kids always bring me new stuff, I’m always checking stuff out on Soundcloud… it’s just anything that’s inspired. I want to hear what inspires you. Don’t just rip something off, find out what inspires you and use that to make something different. I hope something new comes out because it’s about time.”

Korn: We’re not a metal band

The Jonathan Davis Quiz: how well do you know Korn's frontman?

The A-Z Of Korn