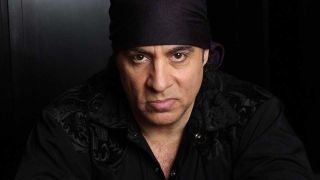 More than half a century after watching The Beatles take America by storm on the Ed Sullivan Show, the music that Steven Van Zandt loved as a child in Boston, Massachusetts, is still shaping the music he makes today.

"I have some distance from it now," he says, "and you can absorb it in a way that's different to when you were a kid. Now you can go back and really analyse it and understand the elements that moved you. Then you can use those elements in your present day work. So, in a funny way, those early records that I loved so much are maybe even more relevant now."

Van Zandt's latest collection is Summer Of Sorcery, an album our reviewer describes as a "widescreen, even over-the-top production" that's "delightfully Spectoresque, pumped with brass and backing singers. And below, he tells us about the records that changed his life and informed that sound.

"Incredible record. One of three singles that I actually wore out, and I don't know how many times you have to play a vinyl single to wear out. 400 times? 500 times?

"Frankie Valli was one of the most incredible singers of all time, and they were embodying the entire doo-wop world."

Little Anthony & The Imperials - Tears On My Pillow

"I would go back and study the doo-wop world later, but initially it was Frankie Valli and Little Anthony and the Imperials' Tears On My Pillow, which really introduced me to that doo-wop world and all that wonderful harmony."

The Isley Brothers - Twist And Shout

"Twist and Shout by The Isley Brothers was another one that I wore out. This was the most incredible thing I ever heard, and I think it was the beginning of a certain Latino feeling that plays a big role in my life to this day.

"One of the elements of my music is that it has that Latino thing, whether it's Cuban or Puerto Rican or Caribbean. There's a Latino theme that runs through my work, and I think it came from that. It also came from Tequila, the instrumental by The Champs, and of course from La Bamba by Ritchie Valens.

The Shirelles - Will You Still Love Me Tomorrow

"So these are the four singles: Franki Valil's Sherry, Little Anthony & The Imperials' Tears On My Pillow, The Isley Brothers' Twist And Shout, and Will You Still Love Me Tomorrow by The Shirelles. They all came from that doo-wop world, ands they're all wonderful records."

"The first album is Meet The Beatles, which we [American fans] thought was their first album, but it was actually the second album. But for us it was the first album, and it changed everything.

"Now we're moving into an area where I want to actually do it myself. I didn't want to be Frankie Valli or Curtis Lee or Little Anthony or the Isley Brothers. But the Beatles were a band, and it was the first time I'd ever seen a band. It had always been individuals or singing groups.

"The Rolling Stones' first album really made me want to do it. The Beatles had revealed a new world to us, but we actually discovered them halfway through their career: they'd been going since 1957, and they'd be gone by 1969.

"So we discovered them in 1964, and they already were sophisticated. They were so good, and the harmony was so perfect, and the hair was different, and the clothes were perfect.

"They revealed a new world, but they didn't exactly invite you in, because they were so good you couldn't even fantasise about being a Beatle. But the Rolling Stones? They made it look a little bit more accessible. They made it look easier. They were the first punk band. They had that street thing. And that's when I thought, 'I want to do this for a living.'"

"There were four or five bands that were part of the British Invasion that never actually invaded, including Ronnie Wood's band The Birds. But our version, The Byrds, were a very important group, as was their first album."

"I discovered Bob Dylan as a rock'n' roll guy with Like A Rolling Stone, which was in the summer of 1965, the year America took back the charts after a year and a half of mostly British music in the charts. Later I would go back and study and learn about his folk years, but I wasn't interested in folk music at all at that time.

"Bob Dylan and The Byrds both hit in '65 and the entire folk rock movement closely followed, which was Lovin' Spoonful, The Turtles, Simon And Garfunkel, the Mamas And The Papas and all that. Suddenly the Americans started to to go back on the charts."

"To this day, if I had to choose one album that was the most extraordinary in terms of the craft, the arrangements, the production and the performances, it would be a greatest hits of The Temptations'. They were just a remarkable group."

"I probably won't be remembered for anything, but if I am it'll be for the Sun City record. It didn't change my life, but it changed a lot of other peoples' lives for the better. We were very much part of the movement that brought down that South African government.

"Peter Gabriel's Biko was the first time I became aware of South Africa, and it led directly to Sun City, so that's the record that changed my life. It fit right into my political consciousness, and stimulated my interest in South Africa."

Little Steven & The Disciples Of Soul's Summer Of Sorcery is out now.