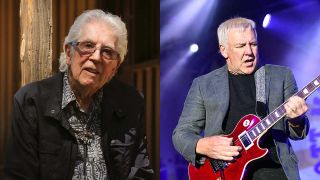 John Mayall - Nobody Told Me

British blues veteran John Mayall has released a cover version of Jeff Healey's Evil And Here To Stay. Taken from his upcoming album Nobody Told Me, it features a guitar solo from Rush star Alex Lifeson. It's out this Friday.

"Evil and Here to Stay is just one of the star studded songs you’ll be playing over and over," says Mayall. "On this particular track you get to hear some great guitar soloing from special guest Alex Lifeson, who feels right at home with this special groove."

"One of the first songs Rush learned to play as a band in front of an audience was Snowy Wood in 1968," says Lifeson. "So are influences go a long way back with John Mayall.

"When I was asked to do this particular project I was actually quite thrilled by it. Long being an admirer of the many amazing guitar players that have been a part of the Bluesbreakers and to be considered in that esteemed group I was very, very honoured, and it’s been a real pleasure."

Nobody Told Me finds Mayall in the company of several other heavyweight musicians including Joe Bonamassa, Todd Rundgren, Steve Van Zandt, Larry McCray and Carolyn Wonderland. It was recorded at the Foo Fighters' Studio 606 in Northridge, California, on the console Fleetwood Mac used to record their Rumours album.

Mayall tours Europe from late February until mid-April, with US shows lined up throughout the summer. Full dates below.