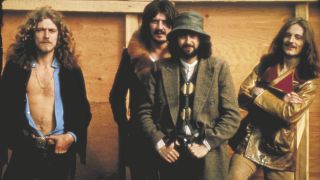 Next month, lawyers for the estate of late Spirit guitarist Randy California will face off against Led Zeppelin’s legal team at the Central District of California Court to settle a dispute over copyright infringement which could have significant ramifications for the music industry. The argument centres around the claim that Jimmy Page and Robert Plant knowingly appropriated sections of Spirit’s 1967 instrumental Taurus for the opening section of Stairway To Heaven.

There’s huge interest in the case, for a ruling in favour of California’s estate could open the floodgates for a spate of similar lawsuits. The notion of artistic copyright may seem quaint in an age where consumers have become accustomed to free access to cultural ‘content’, but beyond the blithe aphorism ‘talent borrows, genius steals’, the retention of copyright remains a fundamental right for artists, writers, musicians and other creatives.

One wonders though where this might end. A decade ago, US comedian/musician Rob Paravonian deftly demonstrated that one simple chord progression, based around the classical motif Pachelbel’s Canon in D, formed the root of hundreds of contemporary songs, from Green Day’s Basket Case and Avril Lavigne’s Skater Boi to U2’s With Or Without You, Aerosmith’s Cryin’, Twisted Sister’s We’re Not Gonna Take It and The Beatles’ Let It Be.

As entertaining as this routine may be, it illustrates that there’s an infinite number of compositions that can be crafted from an extremely limited musical palate, and very few truly original ideas under the sun. As much as rock ‘n’ roll has been bent into myriad fascinating shapes since the 1950s, there will always be basic structures recurring and subconscious ‘steals’.

Brian Wilson may have evolved into one of the most sophisticated songwriters of the modern age, but his original claim to be the solo composer of Surfin’ USA was later amended to acknowledge its debt to Chuck Berry’s Sweet Little Sixteen. Just last year, Sam Smith amended the credits to his 2014 single Stay With Me after being contacted by the publishers of the 1989 Tom Petty/Jeff Lynne hit I Won’t Back Down in regards to similarities in the melodies on the two songs’ choruses.

“These things can happen,” Petty admitted after he and Lynne were credited as co-writers. “Most times you catch it before it gets out the studio door but in this case it got by.” Were he a more litigious man, Petty might also care to examine parallels between Red Hot Chili Peppers’ Dani California and his own Mary Jane’s Last Dance, or between The Strokes’ Last Nite and American Girl: lawyers don’t even need to prove deliberate intent, as George Harrison discovered when cited for ‘subconscious plagiarism’ after comparisons were made between his 1971 hit My Sweet Lord and the Chiffons He’s So Fine.

More recently, Weezer frontman Rivers Cuomo admitted that in trying to imitate the style of the Velvet Underground for Undone (The Sweater Song) - the very first song he wrote for his band – he realised he had subconsciously ripped-off the intro from Metallica’s Welcome Home (Sanitarium). But then online sleuths have accused Metallica of nicking that same intro from cult NWOBHM act Bleak House’s 1980 single Rainbow Warrior. And, ironically, given the starting point for this discussion, Bleak House guitarist Graham Killin stated that in writing that song, he was trying to create his band’s own Stairway To Heaven.

One might drive oneself to distraction picking apart the source materials for rock’s biggest hits: long before hip-hop’s practice of sampling beats and riffs brought publishing lawyers swooping, it was common practice for rock‘n’roll musicians to find ‘inspiration’ in blues and folk standards, songs which themselves were passed along orally long before anyone thought to notate and copyright their melodies.

There is, of course, a difference between actively seeking to profit from stealing a melodic line and ‘taking influence’ from what’s come before, but most bands will start out aping the sound and shape of their heroes and peers before finding their own voice: there’s been a de facto ‘School of Rock’ inculcated in black vinyl grooves since the first musical recordings were made available. And equally there’s a unique joy, energy and character that performers bring to familiar source material which puts flesh upon the basic skeleton of rock ‘n’ roll and begats new icons: without steals from the past there’d be no Stones or Beatles or Dylan or Springsteen to emulate.

This isn’t to say that musical artists get a free pass to rape and plunder as they see fit – and next month a jury will decide whether Page and Plant overstepped that mark - but there surely has to be an acknowledgement that our world shares a well-defined musical vocabulary and that musicians must be given a certain leeway to express themselves in the common tongue. Lawyers will find hundreds of ways to get rich and fat, we don’t need them policing our world and slowly draining away the spontaneity, spirit and soul of rock ‘n’ roll. There’s more at stake than money here.