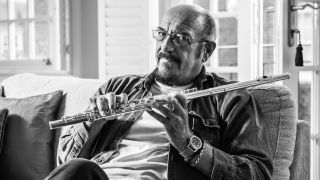 His life has been full of surprises, not least when his former Tull bandmate David Palmer had a sex change, or when Tull beat Metallica to win Best Hard Rock/Metal Performance in the 1989 Grammy Awards.

You’re a self-taught musician. Why did you choose flute instead of something more rock’n’roll?
I started off with the guitar, but I decided to give it up when I heard Eric Clapton. It’s the way people are put off playing tennis when they watch Roger Federer. I found the flute gave me something interesting melodically.

What else can you do on one leg, besides playing flute?
I can hover in a rather interesting way. Playing on one leg is a very stilling and focusing way of achieving balance, physically and mentally. And of course it’s a visual trademark, a bit of a moment for the audience.

Did the old rebel in you have difficulty accepting an MBE?
My only problem was that I was very much opposed to some of the policies of Tony Blair during his regime, and my award was decided under a Blair government. I came very close to saying I couldn’t accept it. I’d like to think that it was awarded for my efforts in having musicians’ copyright recognised, rather than for making rather too much money out of playing the flute for many years.

Where do you stand politically?
That’s a difficult one. I know more Labour people, but in past years the Conservatives have had my grudging support.

Do you resent paying high taxes?
I’ve never been a tax exile. We secured Swiss residency, but decided that such a radical change of life just for saving money was… well, not cricket. I am, in principle, in favour of a relatively high level of tax for the highest earners. If you’re making £20 million a year and you pay 80 per cent tax, life’s not come to an end.

Do you believe in God?
I’m not a Christian. I don’t ‘do’ Jesus. But Christianity, like most of the world’s great religions, is a good, practical moral code for living. However, there are some very nasty messages in the Bible. That Moses guy – dangerous freak!

How did you react when former Tull keyboard player David Palmer said he was going to have a sex change?
My reaction when I first found out that David was undergoing gender change was one of anger, because he might have told me before the News Of The World camped on my doorstep, having assumed it was I who was about to place something precious to me in a jam jar on the mantelpiece.

You played on Blackmore’s Night’s album Shadow Of The Moon. Do you think Ritchie Blackmore has lost a few marbles?
I don’t know Ritchie terribly well, but he’s far from dotty. He’s always had an interest in medieval music, and has cited Jethro Tull circa 1974 as being very illuminating. Ritchie certainly has a fondness for dressing up in what I believe they call ‘garb’. But it’s slightly tongue-in-cheek. Ritchie is not someone who is palpably comedic. His sense of humour, it has to be said, can be cruel, but he’s definitely not mad.

Why were you never into drugs?
I don’t enjoy the change of mood that comes from people who are drugged or drunk. I find it difficult to form bonds with people who are out of their brains.

What and when was the lowest point of your career?
In 1972, at the end of an American tour for Thick As A Brick, I had a firm resolve to walk away from Jethro Tull and playing live music. It was a feeling of betrayal – these people buy your record and then come to a concert and whistle and hoot and screech and generally do everything possible to stop you hearing what you’re playing! A baying crowd just looking to get their jollies out of volume and repetitive rhythm – it all felt quite vulgar.

What’s your biggest regret?
Not having developed a wider set of interests. There are things I’ve never done that, physically, I’m patently too old to do. Intellectually as well, there are things I should have grappled with. The trouble with a music career is it’s a whirlwind.

What is the meaning of life?
To know the answer to that, you have to know the meaning of death. And I’m not sure I believe in any life after death. Life is an opportunity as well as a test, but ultimately it’s all just preparing us for the big mystery of death. That’s pretty scary stuff for people like me who can’t face the idea of retirement sitting in an armchair watching repeats of Casualty until we finally pop off.

What will be written on your tombstone?
‘Nice try’