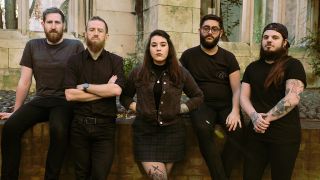 Hardcore ragers Ithaca were in Copenhagen, in the middle of their spring tour, when the Coronavirus started to sweep across Europe.

As lockdowns started to clamp left, right and centre, the band had no choice but to abandon their remaining tour dates and get back to the UK as quickly as possible.

We catch up with guitarist Will Sweet to talk about lockdown productivity, the future of gigs and fundraiser, The Tours That Never Were, which allows fans to buy the merch of underground bands, including Conjurer, Black Peaks and Palm Reader, who saw their tours cancelled in March and April.

You were on tour when Coronavirus hit Europe. What was that like?

“[We were playing] a split show because the venue had a ban on mass gatherings over 1,000. We played one show to 500 people, then the other show was supposed to be to the other 500. In-between, the Danish Prime Minister went on the news and shut it down to 100. We hot-footed it back to the UK the next morning and spent two days in the van, which was grim, because by that point we were all actually getting ill. We’re 99% sure we had [Covid-19].”

What’s it like being in a rising band at this time?

“Sam [Chetan-Welsh, guitarist] is doing a lot of writing but we can’t talk to each other apart from the odd Zoom session, and that’s never going to be that productive. So we’ve had to just put a hold on the whole thing until we can all get in the same room. We can send each other little sound recordings on our phone but the way we write is to get together in a room, sit down and talk about things.”

What do you think the future of the gigs will be?

“It’s going to be a lot less kinetic isn’t it? There won’t be people punching each other down the front. We’ll go back to the days of stroking your beard and nodding, which to be fair is very much like the shows we used to play when we first started out.”

How do you think the pandemic has affected underground scene?

“It’s taken a huge hit. Venues were under threat anyway but how many of them are going to be able to recover financially from this and keep putting on shows? As hard as it is on the bands, there’s people like tour managers, drivers, photographers, sound techs… it’s whether they can afford to come back to it if there’s not much of a scene or if it’s reduced.”

Tell us about the ‘Tours That Never Were’ campaign.

“If you’ve got money to spare, and I know not everyone has, buying The Tours That Never Were stuff is a good way to keep these bands afloat when they’ve lost a lot of money. It’s a way of saying we are here, we’re still supporting each other. There is still a scene.”

You can read more about the campaign and support the bands involved at The Tours That Never Were official site. The campaign is designed to offer relief to independent and underground UK-based bands and crew, and various charities