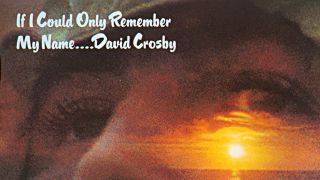 They say you can judge a person’s character by how well they cope in the face of adversity.

By 1971, David Crosby had more than his fair share of things going badly wrong. Long‑term girlfriend Christine Hinton had died in a tragic automobile accident and Crosby, Stills, Nash

And Young were lost in a haze of marijuana smoke and slow-burning enmity. Against such odds, the singer managed to produce a remarkably focused solo album.

A dazzling reconciliation between the conflicting aspects of his musical personality, it threaded a masterful balance between wild, let-it-all-hang-out abandon and the reined-in discipline of a truly inspired harmonist.

Alongside the presence of Graham Nash and Neil Young, it features the great and the good of the West Coast scene, including members of Jefferson Airplane and the Grateful Dead, who were at Wally Heider’s studio putting the finishing touches to American Beauty during the day while Crosby worked his magic in the evening shift.

Deploying experimental tunings, daring approaches to form and a genuine improvisational sensibility, there’s an open‑ended, documentary feel to the album, thanks in part to engineer Stephen Barncard’s policy of keeping the tapes rolling throughout the sessions, resulting in a sense that songs don’t so much start and end as coalesce, gather pace and then gently disappear.

Despite its laconic sweetness, the contemplative drift of Laughing is actually an acid riposte to the faddish spirituality of the time. True enlightenment is found in the Joni Mitchell-enhanced harmony climb-out and the dazzling shafts of Jerry Garcia’s slide guitar, both of which are as radiant as the album cover’s ascending sun.

Instrumentals Tamalpais High (At About 3) and Song With No Words (Tree With No Leave) revel in a nimble jazziness, while Crosby is at his most vulnerable and naked on I’d Swear There Was Somebody Here, as wreathes of echoing, multitracked, wordless vocals wail and circle around the memory of his lost love, manifesting a loss too terrible to put into words.

Against the intricacies of Crosby’s painstakingly constructed, pristine harmonies, there’s a scratchy quality to some of the playing. Whatever momentary lapses in technique that may exist on the album, overall he’s carried aloft by the sense of transcendent joy that comes from foraging out at the edges of things and relishing his newly acquired freedom.

Arising out of professional disenchantment and the pain of personal grief, with this album, Crosby proved to himself – and, perhaps more importantly, to sceptical onlookers – that he was capable of standing on his own.