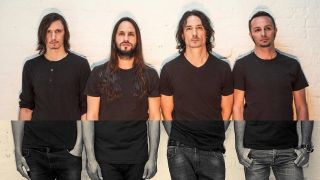 France might be more famous for its cuisine that its rock music, but there are plenty of great artists toiling in the shadow of poor ol’ Johnny Halliday’s fake biker imagery. Here’s 10 to get you started…

Nearly a decade before the famous Anthrax cover version, France had its own Antisocial anthem, a voice from a desperate nation. Trust were suburban blue-collar lost boys who mixed raw street punk with down-to-earth hard rock. Bon Scott used to love’em and public-enemy number one Jacques Mesrine was almost a father figure to many.

These four guys rolled down their mountain with full make-up and spandex, matching a larger-than-life 80’s attitude with sharp pop metal song-writing. The two most recent of the five Blackrain albums were produced by the legendary Jack Douglas. “It’s very rare to have a French band that rocks like this,” says Jack.

Praised by underground intelligentsia and hipsters in The US, The Limiñanas are a male-female fronted duet from Perpignan, a delicious bitter-sweet soundtrack for Nouvelle Vague Truffaut/Godard movies with 60’s Italian flavours. The sound is a Farfisa-and-fuzz-injected musical experience that sits right between The Velvet Underground and Serge Gainsbourg.

No One Is Innocent

Shortly after Killing In The Name, No One Is Innocent delivered their very own french anti-racist anthem, La Peau. With Armenian singer Kemar fronting bullet-proof Rage Against The Machine-like warriors, France had its own true revolutionary flag-holders, two centuries after La Marseillaise.

Like Slade or Queen, they’ve been played at every wedding, Friday night student party or Bar-Mitzvah in France for almost 40 bloody years. But before going pop and somehow becoming labeled by non-rockers as THE french rock’n’roll band, this three boys-one girl Rolling Stones-influenced quartet used to be really, really good.

There’s no desert here, but France does have a secret band escaped from its very own Area 51. Mars Red Sky are some kind of unidentified super fuzzed freaky power trio from Bordeaux, bearers of a modern alien space-rock stoner formula that buzzes loudly in the stratosphere. Latest album Apex III - Praise For The Burning Soul is a masterpiece.

Hailed by Metallica and everybody else as tomorrow’s leaders in metal, Gojira escaped the woods near the Basque country to fight and live their dreams, originally mixing the Mets’ with Sepultura, Morbid Angel and Meshuggah influences. Huge everywhere else on the planet, they’re still obscured in France by crappy totalitarian radio pop.