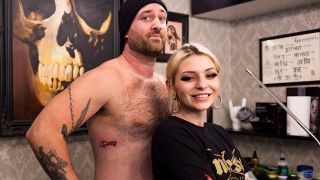 It was just meant to be an ordinary quick drink after work. On what we assumed would be a quiet Thursday evening, a few of team Hammer decided to nip into one of London’s top rock and metal bars for a beer. Upon arriving at The Black Heart in Camden Town – a delightfully metal friendly establishment with a fine selection of beverages and a stereo that was cranking out Corrosion Of Conformity as we entered – it appeared that something a little special was happening on this particular evening. Pictures of Ozzy Osbourne, taken from the front cover of his new album Ordinary Man, adorn the walls and there is a photo booth and a t-shirt press taking up half the bar.

Nosing around, like all good investigative journalists would, we discover that The Black Heart has been chosen as one of over 50 venues across the globe to celebrate the launch of said new album with a playback party. Excellent! Wrist band obtained and access granted, we take Ozzy’s team up on their very kind offer of free drinks from the bar and continue snooping around.

Most album playback parties consist of a sterile environment, such as a record company boardroom, a couple of free biscuits and a cup of coffee. So this endless supply of beer, a free t-shirt and use of the photo booth feels like a genuine step up. Ozzy, as ever, has smashed it.

There’s more, though. Over in the corner people are signing up for something. On closer inspection, there is one last freebie available: a genuine Ozzy tattoo for anyone willing to get one. We grab a young lady named Ella, who is in in charge here, and ask her what the deal is. “It’s a real tattoo, sure,” She smiles. “But you should only get one if you really love Ozzy.” Hold on, that sounds like an insinuation that maybe we don't love Ozzy enough. We’re Metal Hammer, goddamn it! Nobody loves Ozzy more than Metal Hammer! Sign us up! NOW!

We’re told to wait to be summoned to Nemesis Tattoo Shop around the corner, and while we wait the new Ozzy album is blasted over the stereo, which adds to our Dutch courage. We’re pleased to report that, after a ten-year gap since his last album Scream, Ozzy has still got it in him to write some bangers. Opener Straight To Hell is raucous, Goodbye has a really cool, doomy Alice In Chains vibe to it, the title track – a stirring ballad duet with Elton John – is pompous and overblown but somehow still works. His collaboration with rapper Post Malone, It’s A Raid, is as greasy and obnoxious as the Double O has sounded for years. Nice.

Eventually we're told to wander along down the street to Nemesis, where we're greeted by a smiling shop full of excellent tattoo artists, one of whom is still working on a young lady who is getting an upside down cross tattooed on her chest. We enquire about her choice. “I love Ozzy, I think he’s fucking great.” She shoots back at us. “Also, I got a free tattoo.” Both good reasons to be fair.

As they finish up it’s our turn to go under the needle. There are a handful of custom designs that have been drawn up for the event, and of those the upside cross does look the most appealing. But, to be honest, if you’re going to do this then you might as well go big, so we opt for the Ozzy logo from the 90s. The one that came about during the Ozzfest-era; a time very close to our hearts. Yes, that’s the tat. The next decision is where it shall go. We enquire about the ribs and are told by staff that ribs are incredibly painful... although they then proceed to suggest the neck. You’re taking the piss, lads! Ribs will be fine.

We strip off, lie down in a pretty uncomfortable position, and wait to have our flesh succumb to The Prince Of Darkness.

A live version of Ozzy performing the classic title-track of the self-titled Black Sabbath album plays over the stereo, quite pertinent as that record has just turned 50 years old this week.

We’re not going to lie: the ribs do really hurt. But by the time the song has finished, so is the tattoo. We get up, gingerly – it’s really quite sore, just to reiterate – and thank the staff at Nemesis for their fine work.

Back at The Black Heart the album playback is still in full swing, and the free beer still hasn’t run out. A young man, named Chris, is in the photo booth having just had a tattoo of his own, one replicating the smiling faces on Ozzy’s knees. “He’s a legend,” He says. “Any chance to be more like Ozzy I’m going to take it.”

Same. It was meant to just be an ordinary drink on an ordinary night, but, like the album says, Ozzy Osbourne is no ordinary man. When he gets involved it’s always going to get messy.

Steve picks out his Ozzy design

Steve officially signs his flesh over to the Prince of Darkness

Ordinary Man is available now via Epic Records. You can hear the album in full below, and you don't even need to get a tattoo to do so: