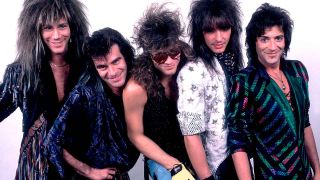 Rock'n'roll bands don't come much bigger than Bon Jovi. In a career spanning nearly 30 years, they have sold 130 million albums and played to an estimated 34 million fans in more than 2,600 shows.

At the heart of this classically all-American success story is the man born John Francis Bongiovi, Jr, in Sayreville, New Jersey in 1962. Blessed with movie-star good looks and driven by a ferocious work ethic and an unshakable will to succeed, he was the kid who had the Superman logo tattooed on his arm and believed it. And after renaming himself Jon Bon Jovi – less “ethnic”, more “rock star” – he found the path to glory.

Having served a lengthy apprenticeship in various bar bands and working at his cousin Tony Bongiovi’s recording studio, The Power Station, Jon got his first break in 1982 when his song Runaway became a radio hit in the Jersey area. A contract with the Mercury label followed, and a band was formed under the name of Johnny Electric, hastily changed to Bon Jovi.

The band’s original guitarist was Dave ‘Snake’ Sabo, a childhood buddy of Jon’s who went on to form Skid Row. But in 1983 Jon settled on the line-up with which he would conquer the world: guitarist Richie Sambora, keyboard player David Bryan, bassist Alec John Such and drummer Tico ‘The Hit Man’ Torres.

It was in 1986, with their third album, Slippery When Wet, that Bon Jovi became one of the biggest bands in the world, and Jon Bon Jovi, with his fluffy hair and million-dollar smile, was transformed into rock’s leading sex symbol. The follow-up album, 1988’s New Jersey, was another multi-million seller. But arguably, Bon Jovi’s greatest success has been their longevity.

While many big 80s acts were killed by grunge, Bon Jovi rode out the storm with 1992’s Keep The Faith. Almost 30 years on, they’re still doing the business, having just announced a European stadium tour and Mediterranean cruise.

But it was in the 80s that Bon Jovi were at their big-haired, hard-rocking best, when Jon sang without a trace of irony or embarrassment: “I’ve seen a million faces, and I’ve rocked them all!” How we loved him for it.

Their saviour was songwriter Desmond Child, who with Jon and Richie wrote the two breakthrough hits You Give Love A Bad Name and Livin’ On A Prayer. However, the singer and guitarist also wrote some great stuff without Child: the rock-star-as-outlaw anthem Wanted Dead Or Alive, and crowd-pleaser Raise Your Hands. By some distance, Bon Jovi’s best album. View Deal

After the phenomenal success of Slippery When Wet, Bon Jovi didn’t mess with a winning formula on the next record, retaining producer Bruce Fairbairn and Child, who co-wrote this album’s juggernaut of a hit single, Bad Medicine.

Having planned on using another innuendo – “68 And I Owe You One” – for the album’s title, they chose instead to honour their roots with New Jersey. And the influence of Jersey’s favourite son, Bruce Springsteen, was evident in Blood On Blood.

New Jersey topped the charts in 10 countries and yielded five top 10 US hits, the biggest ever haul for a hard rock album at that point. View Deal

In the first UK review of Bon Jovi’s debut album, veteran critic Paul Suter stated: “Jon Bon Jovi has assembled a band of classic finesse... blessed with a commerciality that should ensure plentiful sales and success.” He wasn’t wrong.

Bon Jovi’s debut didn’t “do a Boston”, but it reached 43 on the US chart. Runaway was the standout track, a supercharged hard-rock anthem, recorded in ’82 before the band existed, with Jon using session musicians. But other brilliant songs, such as Roulette, proved that Jon’s new boys had something special.

This album, for all its naivety, is the Jovi connoisseur’s choice. View Deal

In the year when Nirvana’s Nevermind topped the US chart, Bon Jovi survived the great hair metal bloodbath by playing it very smart.

Jon made headlines by having a haircut, and the band released the symbolically titled Keep The Faith. The album redefined Bon Jovi as a stadium rock act for a new era. Its title track and flagship single delivered the band’s trademark radio-friendly hooks in a more modern style. The nine-minute Dry County showcased a growing maturity. And the cheesy Bed Of Roses kept the soft rock fans happy.

If Slippery... made Bon Jovi’s career, Keep The Faith saved it. View Deal

Although the title of Bon Jovi’s second album recorded the temperature of volcanic lava, the reaction from press and public alike was at best lukewarm.

7800 ̊ Fahrenheit was only a minor hit (US 37, UK 28), and left Bon Jovi lagging far behind their rivals. But while it’s no Slippery When Wet, this album is due a reappraisal.

There are some great songs here. In And Out Of Love is prime mid-80s cock rock and best of all is Tokyo Road, a propulsive hard rocker with Jon’s most risqué lyric (“Snortin’ whiskey, drinkin’ coke...”).

Four of the five band members who recorded the debut album stayed in Bon Jovi for 30 years. But the fifth, Alec John Such, was ‘let go’ before this, the sixth album, his exit attributed to that great rock‘n’roll misnomer, “substance abuse”. With old friend Hugh McDonald replacing Such (albeit not as an official member) the Bon Jovi machine kept rolling on. In the UK, These Days hit Number 1.

Hey God was a powerful modern rock anthem, and on the title track Jon came as close as he ever would to emulating his hero, Bruce Springsteen.

For many, this was Bon Jovi’s last great record. View Deal

When Jon Bon Jovi’s debut solo single Blaze Of Glory hit Number 1 in the US, it appeared that the band might be finished. But in the end, all Jon needed was a break from a gruelling album/tour cycle.

Blaze Of Glory – a mythic cowboy song like Wanted Dead Or Alive – was the theme to the Western Young Guns II. Featuring heavyweight guests (Jeff Beck, Elton John, Little Richard) and several fine songs (notably Justice In The Barrel), the album was certainly more successful than Jon’s bit part in the film (gunned down in seconds).

Eight years after Keep The Faith updated Bon Jovi’s sound for the 90s, another monster hit, It’s My Life, repeated the trick in the next decade. In a controversial move, Jon and Richie wrote It’s My Life with Swedish hitmaker Max Martin, whose previous clients included Britney Spears.

But not only is this song one of the heaviest Bon Jovi have ever recorded, it’s also a throwback to their 80s pomp, with a classic fist-in-the-air chorus, talk-box guitar from Sambora echoing Livin’ On A Prayer, and lyrics referencing that song’s lead characters Tommy and Gina.

The remainder of Crush is at best solid, but no matter: It’s My Life did all the hard work. View Deal

Richie Sambora got a little carried away when he said of The Circle: “It rocks hard!” In reality, Bon Jovi’s eleventh studio album and fourth US Number 1 didn’t punch with the same weight as the band’s 80s classics. But it was a marked improvement on 2007’s cheesy country-crossover Lost Highway.

Its first single, We Weren’t Born To Follow, is a vintage Bon Jovi anthem. Brokenpromiseland is U2 on steroids. And although Work For The Working Man didn’t ring as true as Livin’ On A Prayer now that Jon Bon Jovi is worth over $400m, the song was cited as an inspiration by Barack Obama’s chief advisor David Axelrod.