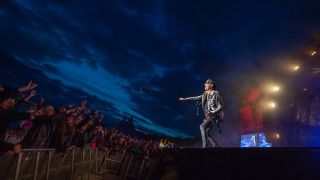 Almost 55 years since they first emerged unto the world, Scorpions are still a vital force in rock & metal.

From the literal ground rumble of their intro tape it becomes immediately apparent that the band are no strangers to crowds like these, the ensuing show proving just how they were able to hold their own when playing alongside the likes of ACDC, Iron Maiden or even Queen.

Scorpions don't need to ask if they are big enough to headline a stage like this - they know it and own every single second they are onstage. Coming out to Going Out With A Bang, Scorpions offer the no-frills thrill of stadium sized rock, dispensing with pyro and largely just letting the songs do the talking.

That's not to say there's no production of course; the light show is nothing short of spectacular and evokes the heady excesses of 80s hair metal videos on MTV, a kaleidoscope of lights and lasers turning this into an exercise in sensory overload.

It's not just the band that makes Scorpions' set feel incredibly special, mind. Roaring along en masse, the crowd react to Make It Real with a fervour that confirms just how anthemic an arsenal the German rockers have, and why Bloodstock is exactly the right place to host their return.

Whilst perhaps the headliner least obviously affiliated with heavy metal, Scorpions' set nonetheless pulls out all the stops to show how they fit into the metal pantheon.

Guitarists Rudolf Schenker and Matthias Jabs tear up the stage throughout the whole set, dashing from one end to the other so often it retroactively makes every other act feel a bit static.

But then, that's Scorpions for you - a band determined to prove themselves every bit the contender against even the biggest bands in the world, completely unwilling to be outdone.

And then, there's the solos. It doesn't feel like 30 seconds can go by without a showy guitar lick howling out into the night, and while that can feel like a special kind of hell when thrown out so gratuitously (see Guns 'N Roses set at last year's Download Festival) for Scorpions it just feels like an essential part of their charm.

As with many of their contemporaries, there are signs of aging that just can't be helped. The seemingly endless drum solo initiated by Mikkey Dee feels more aimed to give the band a rest than to prove his own talent (as if he'd need to) and frontman Klaus Meine is much more reserved in his movements than his  but after each break Meine comes back born anew, whipping the crowd up in a way that doesn't communicate any of his 71-years.

It doesn't hurt that Scorpions have so many singalongs in the tank - songs like The Zoo, Blackout and Big City Nights all sounding massive.

Even among these treasures, there are gems that shine brighter still - an acoustic rendition of Send Me An Angel (complete with the whole band playing on the catwalk) shows power ballads work fantastically at even the most ardent metal festival, while Winds of Change feels especially poignant when Meine points out the band play it almost 30 years to the day after the pivotal Moscow Music Peace Festival.

Closing on the enormous one-two punch of Still Loving You and Rock You Like A Hurricane, Scorpions prove that their shine hasn't dulled this past half century plus.