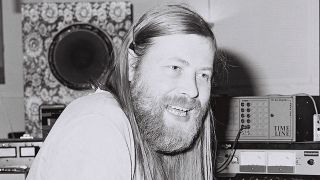 Pop quiz: who’s the greatest prog rock producer of them all? Is it Eddy Offord, the man who helped construct the groundbreaking sound of ELP and Yes, or John Anthony, who shepherded Genesis, Van der Graaf Generator and Roxy Music to some of their early peaks? Or maybe it’s Terry Brown, Rush’s unofficial fourth member during their 70s imperial phase? Is it a game-changing auteur like Robert Fripp or Brian Eno? Or is it the daddy of them all: the late, great Sir George Martin, without whom the world would sound very different?

But there’s another, more left-field contender to consider, one who never worked with any of the genre’s big names but whose collaborations with a generation of experimental German bands would change the course of mainstream music: Conny Plank.

Between 1969 and his premature death in 1987, Plank helped instigate an underground revolution whose aftershocks can still be felt today. Working with such far-seeing bands as Neu!, Kraftwerk, Cluster, La Düsseldorf and Guru Guru, he helped draw up the boundaries of what came to be known as krautrock. His radical approach to recording rubbed off on sometime collaborator Brian Eno, who in turn spun it into commercial gold via the albums he made with David Bowie, Talking Heads and U2.

“Conny was all about using the mind – taking the available technology and doing something special with it, changing it around,” says Neu! guitarist Michael Rother, who recorded several albums with Plank between the early 70s and the mid-80s. “He wasn’t like a mad scientist with all these live wires hanging around in the studio. The live wires were all in his mind.”

Plank himself put it more succinctly in a rare interview when he said: “Craziness is something holy.”

He was a creature of the studio, whether that was the commercial units he used at first or the recording space he later set up himself outside Cologne. Like George Martin and dub reggae pioneer Lee ‘Scratch’ Perry, he saw the studio as an integral part of the music that was being made. Sounds were warped and treated, tapes and instruments were manipulated, notes were sampled, replayed and twisted, physical space itself would become part of the music he helped create.

“There are two types of production,” says The Fierce And The Dead’s Matt Stevens. “There’s the one where you capture what you hear, whereas someone like Conny Plank created a world in sound using the studio as an instrument. It’s a way of designing the sound in the studio.”

Konrad Plank was a child of the Second World War. He was born in the town of Hütschenhausen, South West Germany, in 1940, where his father played the organ in his local church. “I remember him telling me that his father was very strict and unrelenting in his musical ideas,” says Michael Rother. “Conny wasn’t like that. He loved to experiment.”

One of Plank’s first jobs was as engineer on a big band album made by German movie star Marlene Dietrich. By the late 60s, he was immersed in his homeland’s burgeoning underground music scene, producing albums by proto-krautrock bands Kluster and The Organisation, the latter featuring future Kraftwerk members Florian Schneider and Ralf Hütter.

“It was a time of big changes in Germany,” says Rother. “There was a post-World War II generation who were reacting against the past. It was a time of unrest and struggling to find your own identity – just to enjoy being different in every possible way. That was a motivation for Conny too.”

Rother met Plank in 1971 when the guitarist was briefly a member of Kraftwerk, whose first four albums the producer worked on. When Rother and drummer/vocalist Klaus Dinger put together Neu!, their first and only choice of collaborator was Plank.

“If we had approached another engineer or producer and said, ‘We don’t have any money but we have these ideas in our minds,’ they would have laughed at us,” says Rother. “But because Conny had a musical mind, he saw the qualities that were coming. He was someone who was willing to do crazy things. He was equally interested in doing new stuff and doing innovative sound as we were.”

The sound Rother, Dinger and Plank created across the three albums that Neu! released between 1972 and 1975 – Neu, Neu! 2 and Neu! ’75 – were instrumental in defining the shape this new musical form would take. Rother’s heady washes of guitar and Dinger’s instantly iconic ‘motorik’ drumbeat was a revolutionary new sound that still resonates today. But Plank’s contribution was no less crucial to what was being created, pushing what the two musicians were doing even further out. Rother remembers recording Hallogallo, the first track on Neu!’s debut album and one of krautrock’s foundation stones.

“I was doing overdubs in the recording room and he turned around the tapes so they played backwards,” says Rother. “So I played along to that, and that was turned around again. I don’t know where that idea came from, but it was inspirational. We were all producers, Klaus, I and Conny. But we owe him so much. We would not have been able to put the materials together the way he did. We needed his experience.”

Plank was an imposing figure, tall and red-haired. He could be opinionated when necessary, though that wasn’t his default setting. “He was very modest and he listened and maybe nudged you along sometimes, but in a very careful way,” says Rother. “Conny had this ability to pick up where you were going and what you wanted to express and help you get there.”

Plank’s collaborations with Neu! remain his most resonant work, but he was more than just a one-band wonder. Through the 70s, he became the go-to producer for a host of German bands twisting ‘rock’ music into new shapes: Neu!, Kluster/Cluster, Can, krautrock ‘supergroup’ Harmonia, Dinger’s post-Neu! group La Düsseldorf, Guru Guru (with whom Plank also played keyboards and guitar). None of these bands sounded anything like each other, but Plank’s production was the connective tissue that linked them. As Rother, who continued to work with the producer after Neu!’s initial split in 1975, puts it: “You can’t separate Conny from the bands he recorded because they belong together.”

By the late 70s, Plank’s influence was beginning to bleed beyond the boundaries of the German avant‑garde scene. Brian Eno, a man whose antennae were perpetually fine-tuned to radical new sounds, would take inspiration from Plank’s methods when he united with David Bowie on the singer’s celebrated ‘Berlin Trilogy’ of albums, 1977’s Low, ’78’s “Heroes” and ’79’s Lodger.

“You can trace the Berlin-era albums back to Conny Plank,” says Matt Stevens. “Even though at the time, people never made that step back to him. The thing about Conny Plank is that a lot of the bands he was working with and the music he was making was so obscure that it was hard to even read about, let alone find before the internet. It was only when Julian Cope put out his Krautrocksampler book [in 1995] that a lot of people suddenly became aware of him.”

Inevitably, Eno and Plank came into each other’s orbit. The German engineered Eno’s 1977 solo album Before And After Science, and co-produced the collaborative album Cluster & Eno the same year. Eno later recalled Plank setting up an innovative camera system to take photos of the mixing desk after every session so he could replicate the positions of the faders should he need to in future.

As Plank’s influence grew, he became a magnet for bands outside of the German underground. He wasn’t averse to working with more mainstream groups – as far back as 1972, he had produced the debut album from German rockers the Scorpions, and by the early 80s he had added Devo, Eurythmics, A Flock Of Seagulls and Ultravox to his CV. It was the latter’s 1982 album Vienna, with its gothic synth-pop title track, that would give Plank his biggest commercial success. A mooted collaboration with U2 on what would become their 1987 album The Joshua Tree could have been even more successful had it not fallen apart after Plank met the band. “I cannot work with that singer,” he reportedly said of Bono.

In truth, Plank thrived in the cracks between the paving slabs of the music industry. In the 80s, he continued to collaborate with Michael Rother, former Cluster members Dieter Moebius and Hans-Joachim Roedelius, ex-Can bassist Holger Czukay, Brian Eno and others in various permutations as both producer and musician.

It was while Plank was on tour with Dieter Moebius in South America that he became ill. Returning to Germany, he was diagnosed with laryngeal cancer. On December 18, 1987, Conny Plank died. He was just 47.

More than 30 years after his death, numerous bands and producers still draw inspiration from what Plank created in the 70s. Some of it is direct – Steven Wilson covered Neu!’s Hallogallo with Porcupine Tree, while Radiohead’s 2016 track Full Stop sounds like a vintage krautrock jam retooled for the 21st century. Some of it is less so: the likes of producer Nigel Godrich, King Gizzard And The Lizard Wizard mastermind Stu Mackenzie and The Fierce And The Dead’s Matt Stevens have all been shaped in some respect by Plank’s holistic MO.

“Conny Plank used to record epic jams and then edit them down to tunes,” says Stevens. “That’s an approach we took on our first EP, which was one 19-minute song. His influence is so consistent through a lot of incredibly interesting music over the last 40 years.”

For all his innovations, Plank never swamped the music he was helping to create. Michael Rother recalls the producer being interviewed in the 1980s, a time when all but a few experimental music aficionados knew of his great sonic upheavals.

“He was asked in an interview, ‘What is your role? What do you see yourself as?’” says Rother. “And he said, ‘I’m a midwife – I help the musicians give birth to their ideas.’ That’s a good picture. He knew these ideas were our babies, but he made it possible, in a humble but talented way. He showed us in our best light.”

Conny Plank: The Potential Of Noise is in UK cinemas from August 26.