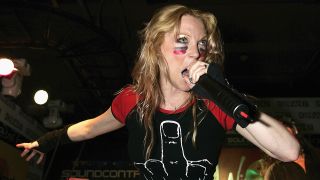 Back in the early 80s, Robert Kampf was just another music-mad German teenager. Having grown up with Black Sabbath, Deep Purple and Led Zeppelin ringing in his ears, he was initially wary of the nascent punk rock scene of the late 70s, but steadily grew to appreciate its energy, aggression and political edge. Soon immersed in Dortmund’s own local scene, he became the singer in a band called Eklatant, alongside friend and bassist Oliver Withöft, and embarked on a career path that he had never seen coming.

“What fascinated me about punk rock was the nonconformity from society and those two fingers in the air, ‘Fuck off, I’ll do it my way!’ attitude and approach to life,” he tells us. “I liked having a different outlook on society and doing something completely different. Somehow, that led me to start a record label…”

In 2018, Robert is celebrating the 30th anniversary of Century Media Records, which he founded and steered through three decades. Today, he cites those early days in the punk scene with Oliver (who sadly passed away in 2014) as the catalyst for everything that followed.

After quitting Eklatant (“I didn’t really like the music much!”), he formed thrash metal band Despair in 1986. In keeping with the DIY ethos he’d learned from the punk scene, he decided to create his own label to release their first album. In 1988 he founded Century Media Records, but not before some fairly idiosyncratic money-making ideas had reached fruition.

“I had some money saved up and I did a long trip through Asia,” he recalls. “Before I set out, I bought tickets for the Trans-Siberian Railway from Beijing to East Berlin. I sold 30 or 40 of them for two or three times what they cost. That financed the trip and I also suddenly had a bunch of cash. So I bought a large number of silk kimonos in Beijing and resold them in Germany. That money, together with some money I’d saved up and a little money my mum gave me, was the foundation of Century Media.”

With the finances sorted and Despair’s History Of Hate album in the can, all Robert needed now was the perfect right-hand man to crunch numbers. After some lengthy persuasion, the business-literate Oliver Withöft finally agreed to pitch in with his friend and make Century Media a genuine force.

“I knew Oliver was smart and had a fearless attitude,” Robert grins. “I had to talk him into it, because he wanted to become a university professor and teach. It wasn’t the easiest thing, to get him onboard, but the rest is history!”

As the metal underground bloomed and the 90s dawned, Century Media steadily became one of Europe’s most prominent metal labels. After a handful of low-key but well-received releases, they broke into the international market with the signing of German death metallers Morgoth, whose popularity overseas kicked open doors for both band and label, particularly in the United States. From then on, Robert shrewdly plundered the death metal scene, via bands like Asphyx and Grave (both still signed to Century Media, incidentally), while also snapping up some of the best new bands from other fledgling subgenres and parts of the world, ranging from US rap-metal pioneers Stuck Mojo to the dark extremity of Portugal’s Moonspell and Sweden’s Tiamat. Significantly, Robert was eager to establish good relationships with his bands, even to the extent of taking them out for a potentially life-threatening knees-up.

“That was a great time,” says Robert. “When Tiamat finished recording Clouds [the Swedes’ third album, 1992], we had Johan [Edlund, Tiamat vocalist] in town, so we went out with tons of friends of mine and did a ton of drinking. We stayed up all night and did a bunch of drugs on top of it! The next morning, we went to an outdoor trucker festival, and we all took acid and did bungee jumping. Twenty-five people, on acid, bungee jumping, ha ha! That’s a great memory.”

One of the most significant signings in Century Media history came in 1995, when Robert spotted the originality and potential in Holland’s alt-metal ingénues, The Gathering. With new vocalist Anneke van Giersbergen setting them apart from pretty much everything, they became the first metal band with a female singer to sign to the label, a rarity at the time.

“Robert saw something in us and had faith in the idea that this thing might become a little bigger,” Anneke, now with Vuur, tells Metal Hammer. “We were already very popular in the underground scene, and I think Century Media wanted to put some more oil on that fire! We were so focused on the music, the details of it, creating a good album, I don’t think we knew it was special, but Century Media recognised that fact, I’m sure.”

Third album Mandylion (their first with Anneke) was an instant critical hit and sold well, but it was the record’s lasting impact on female involvement in metal of which Anneke is proudest. Without making any grand statements, Century Media were doing their bit for the notions of diversity and equality that had been so fundamental to Robert and Oliver’s punk upbringing.

“I think the label discovered the novelty in our approach and our music,” she notes. “There weren’t many bands using a woman as a singer at the time. Other bands followed, and Century Media signed some of them, making them sort of a specialist label. They definitely gave us the tools to grow in the scene.”

Despite all the usual clichés about the 90s being a terrible time for metal, Century Media survived the decade and emerged into the 21st century in an excellent state of health. It certainly helps that one of their most unexpected signings, an Italian band called Lacuna Coil, were rapidly turning into major stars. But as vocalist Cristina Scabbia recalls, signing to such a well-known label was far beyond anything the band had originally dared to hope for.

“Twenty years ago, there were no cell phones and there was no internet, so the guys at Century Media literally took our promo cassette, saw our picture and thought, ‘OK, they look interesting...’” she recalls. “I mean, they had no idea who we were. We were from Italy, which isn’t the most metal country in the whole world. They definitely took a risk. If I think about it now, it seems very surreal. There were a lot of faxes back and forth! Ha ha ha!”

As with everyone we talk to, Cristina speaks glowingly about her band’s relationship with Century Media over the years. The huge success Lacuna Coil have enjoyed since their break-through album, 2002’s Comalies, has certainly been facilitated by the steadiness of their friendship with Robert and his staff, something that goes right back to the recording of their debut album, In A Reverie, in 1998.

“We were recording in a studio in Hagen and living at the Century Media office in Dortmund,” she recalls. “There were six of us, living in one room with three bunk beds and one kitchen and a small bathroom. We were basically waking up, going downstairs to the office, they would offer us coffee and then we would drive to the studio. That period of my life was amazing, because we were really getting connected with them. It made it feel like a family vibe. It was a way simpler and more genuine time.”

Arch Enemy have been through a number of line-up changes over their 23 years, but it was the recruitment of vocalist Angela Gossow in 2000 that caused major consternation among diehard fans. Once again proving Robert’s ability to spot a great idea, Century Media threw their wholehearted support behind the new line-up and the subsequent Wages Of Sin album propelled Arch Enemy to ever-greater success worldwide.

“We picked them up before Angela joined and we were fairly surprised by the choice, but we liked it immediately,” Robert recalls. “Between her amazing voice and presence and Michael’s songwriting, something truly magical happened and we had to be behind it all the way.”

“It was a mixed bag emotionally for many people, getting a female singer into a band like Arch Enemy,” Michael remembers. “But the label were hugely supportive all the way along. We were one of the smaller bands on the label when we started, but I believe that for a while we’ve been the biggest band on the label. We supply great albums and they work them very well! Ha ha ha!”

“I just always came from the viewpoint that a label should be of service to the artist and more or less like a parent is with their child,” Robert concludes. “You have a responsibility for their career and that’s sacred to some degree.”

Partly prompted by the death of his long-time business partner and partly due to bewilderment at the endlessly mutating state of the music industry, Robert sold Century Media to Sony for £12million in 2015. But the label’s story is far from over, thanks to a partnership between major label and revered independent that seems to be keeping everyone happy. Today, Robert spends his days involved in the development of “utility-scale solar farms” (“I stumbled into it and liked it!” he laughs) but he has clearly been keeping a benevolent eye on his old creation’s progress.

“If the industry hadn’t changed as drastically, I probably wouldn’t have sold,” he admits. “It was too close to my heart. But looking back, I think I made the right move at the right time and I don’t regret it at all. What is most important is that Sony have been an extremely fair and good partner. They’re a class act. I can’t say anything different.”

“I always thought Robert was a visionary,” states Michael Amott. “He started in his bedroom like all the other underground labels, but it just grew into something that changed his life and mine, as well as the lives of a lot of musicians around the world. Sticking around for 30 years, that’s really quite something.”