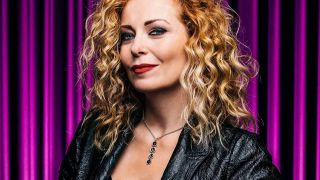 Solo pop star, notable vocal acrobat and contributor to the Devin Townsend Project (check out her searing addition to his song Hyperdrive!!!), Within Temptation, Anathema and Napalm Death, as well as one half of The Gentle Storm with Ayreon’s Arjen Anthony Lucassen, Anneke van Giersbergen stays busy.

Since coming to the public’s attention with The Gathering’s Mandylion in 1994, she’s carved out a career in pop, prog and hard rock. Her latest band, VUUR, takes all those musical components and turns then all the way up to 11.

Do you think your new album will surprise long-standing fans or do they always expect you to evolve and adapt with bands like The Gathering, Gentle Storm, solo and now VUUR?

I am blessed to have such a great following. I’ve always been active in the metal scene but until now, I hadn’t made an album with such a heavy sound. I wanted to make a prog/metal record for a long time and since I’ve been writing and recording this one, a lot of people have been telling me how much they’re anticipating its release. I’m more than thrilled about that!

What themes did you find yourself writing about? You have different bands, do they come with different perspectives?

The theme of the new album is cities. I am inspired a lot by traveling and by all these great places. Every city has a story.

Did your parents approve of you becoming a rock‘n’roller?

Absolutely! They saw how much I loved arts and music since I was very young and that I was passionate about singing too. My parents believe that if you make a living doing something you love, you’ll be a happy person. And they’re right. Besides, they love the style of music I make, which helps…

Which women did you admire in music/rock?

I grew up with singers like Diana Ross, Barbra Streisand and Ella Fitzgerald. I loved their voices and they inspired me to be a singer and a performer. When I was a bit older, about 15, with the help of my older brother and his record collection, I discovered metal and prog rock: guy singers like Mike Patton, Bruce Dickinson and Freddie Mercury, all wonderful, powerful vocalists, but in very different and unique ways.

Do you think as a female that you had to fight harder to reach the top?

I might have been lucky, but I don’t think so. What we did with The Gathering was this new sound in metal, but I found that for a metal and prog audience what’s really important is the quality of your performance. If you play and sing well, if your lyrics are layered and poetic, if you work hard and you put your heart and soul into it, than you will earn their respect and love, no matter if you’re a man or a woman.

Have you ever come up against overt sexism, crew guys, promoters, managers; some kind of glass ceiling?

Never, I am a serious musician and like I said, people respect that a lot in this scene.

Have you always felt at home on stage?

Yes! I love singing and performing. I love sharing music with an audience. It’s the best feeling in the world.

Do younger bands tell you that inspired them?

Yes they do, it’s mostly singers. I feel honoured that they’re now singing and making music and doing something they love. I was inspired by singers when I was young, so I know the feeling, I think it’s great that we all share this art, and that we get to pass it on in some way.

In This Moment We Are Free – Cities is out now via InsideOutMusic.