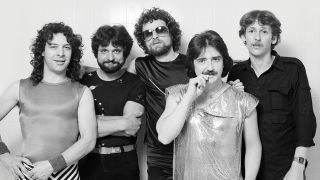 Blue Öyster Cult’s Imaginos has been voted number 16 in our countdown of the 100 Greatest Albums Of The 1980s - read the full list here.

Imaginos is quite probably the longest-gestating album of all time. Its concept – in the loosest sense, the story of an alien race arriving upon Earth in the Middle Ages and shaping human history from that point forward – was developed by erstwhile rock critic Sandy Pearlman when he was still a college student in the mid-60s. Pearlman, of course, went on to found, manage and produce Blue Öyster Cult, originally as Soft White Underbelly. Even the band’s eventual name was taken from their mentor’s monumental creation.

The band used Pearlman’s sprawling collection of poems on the subject as source material for lyrics on their first four albums, notably on two tracks on 1974’s Secret Treaties –Astronomy and Subhuman – but never tackled the whole. That task eventually fell to drummer Albert Bouchard, who, having been fired from the band in 1981, went on to work with Pearlman on a planned three-double-album saga. However, Columbia Records, BÖC’s label, rejected the first instalment of Bouchard’s magnum opus in 1986, by which point BÖC had also disbanded, demoralised after the failure of their most recent album, Club Ninja, and then re-formed once again.

Pearlman coaxed the band back into the studio using his and Bouchard’s recordings as bait. He had BÖC’s two singers, Eric Bloom and Donald Roeser, substitute Bouchard’s vocals on the original tracks. He also added to them a so-called ‘Guitar Orchestra’ that featured, among others, Joe Satriani, and then persuaded Columbia to release the reworked recordings as a new Blue Öyster Cult album.

Trimmed to a nine-track single disc and with the songs lifted out of sequence from Pearlman’s original story, this new version of Imaginos was finally released in July 1988 and promptly bombed. So much so that it would be another 10 years before Blue Öyster Cult made their next record. Yet in spite of the concept being rendered now entirely nonsensical, in all other respects, Imaginos was as powerful and cohesive as the band’s best works from the 70s. Whereas BÖC had strived on their two immediate predecessors for a more AOR-oriented direction and sounded neutered, this was a hulking, riff‑heavy beast, casting them once more as an American Black Sabbath.

Suitably grandiose, it includes such high points as a retooled version of Astronomy and the ludicrously but also magnificently overblown The Siege And Investiture Of Baron Von Frankenstein’s Castle At Weisseria.

Not that Eric Bloom agrees with such sentiments. Speaking today from his New York home, he seems faintly baffled by the Imaginos experience, even 18 years on.

When were you first made aware of the Imaginos concept?

Eric Bloom: Sandy made the lyrics available to the members of the group in the original band house on Long Island. I moved into that house on Christmas Day 1968 and joined the band as a member in April 1969. So the lyrics were always there, in a manila folder. Any of us could just dip into that folder and write a song. But I was never aware that it was supposed to be three double albums. It was Albert who really took that under his wing. Most of the rest of us weren’t that interested in taking this material and making a record with it.

Did you understand the overall concept, or even care about it?

I got the general idea, but not necessarily every nook and cranny of the story Sandy had written. For instance, I know that the aliens lived underwater.

From your point of view, how did Albert’s solo project become a BÖC album?

The band had already re-formed with Donald, Allen [Lanier, keyboards], myself and a couple of sidemen. We had started to work again and there was an ongoing discussion about us making a record. At the same time, Albert and Sandy had been working together for years and by then burned through a small fortune that they had got from the record company. Ultimately, Columbia wasn’t interested in putting their record out, so it came filtering back to us that if we were interested in, um… I don’t know what verb you want to use, but I’ll say ‘fixing’ it then it could be released as a Blue Öyster Cult album.

My part in that record strictly extended to going in and doing vocals. I flew to San Francisco and sang at Pearlman’s studio for six straight weeks. Then I met Donald at the airport, passed off the keys to my rental car to him and he went on and stayed out there for an equal amount of time.

Ultimately, do you think it even really counts as a Blue Öyster Cult record?

In a way, since I sang on it and there’s one of my songs on there, albeit a slightly left-hand voyage through it [an updated Subhuman, retitled Blue Öyster Cult]. But I don’t really have a lot of love for that record because my involvement wasn’t so great. I think it’s fair to say that Columbia, certainly in America, didn’t do anything with it also.

For us, it was a means to a method in terms of getting a new record out. It was helpful to us while we were out on the road and we did play a few of the tunes in the live show. The people that cared, the hardcore fans, knew the story, but it didn’t reach out to the general public. Certainly, it didn’t sell much.

So would you have any interest at all in resurrecting the initial idea of doing three double albums?

Well, I think there is another album in the can. You would have to ask Albert, but I believe he sang on a double record and half of it ended up being used. That was Columbia’s choice to salvage the project.

I mean, it’s an oft-asked question whether or not there will be another Blue Öyster Cult record. We’re always looking for a deal to make something new, but right now the record business is almost non‑existent unless you’re already huge.

It’s not difficult for Taylor Swift to get a new record deal, but for bands like us then it’s something else again. We’ll see if maybe there’s a place for us, and we’re open-minded. I don’t think a new record from us would be rushing up the charts the next day, but you never know.