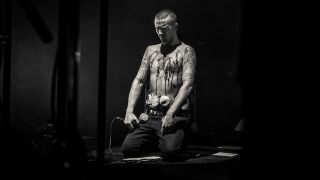 The ground seems to be shaking. There are hundreds of people standing in the dark, their heads moving in unison, the room almost bursting under the pressure of energy released through monolithic, repetitive riffs. Amenra are onstage, the members all lost in shadows and sound. In the middle is Colin H Van Eeckhout, screaming, blood running from his pierced chest, hooked stones hitting hard against his body. It’s one of those moments when music becomes something bigger, when you can almost feel the cosmic axis shift around you.

Just a few hours before, the scene looked much different, though: dead silence backstage, every member of the band slowly vanishing into his own bubble. The singer sits in a dark room and listens to tonight’s songs on his computer, trying hard to get away from the stress, the buzz and the expectations surrounding this evening.

The performance at Brussels’ famous Ancienne Belgique venue is a special one for Amenra, not only being one of the biggest and most elaborate shows they have ever played but first and foremost the release show of their latest and long- awaited album, Mass VI, which once again sees the band dissect their wounds, delving into darkness only to find some light.

“Release shows are always weird. It’s a different energy than usually, there’s shitloads of expectations,” Colin recalls two days afterwards while sitting in a café in Ghent. “How do I look back? Relieved.”

Diving into the cosmos of Amenra, you will rarely hear the words “joy” or “fun”. Because that’s not what it is about. Different from many other bands, the driving force behind the work of the Belgians is not fun but the primal need to manifest and overcome certain things in their lives. For that to happen, the band are constantly analysing and examining their actions, always looking for the things that still could be a little better, relentlessly thriving to paint the perfect picture of their vision.

“We do not do this for enjoyment or for fun. I already made peace with that a long time ago,” Colin confirms. “A lot of people say before shows that you just have to try to enjoy the moment. And that’s true because it’s a grand moment, but it’s so hard. We haven’t figured out how to do that yet. So we never look back with happy thoughts. But there is a sense of pride and accomplishment.”

And that does not only hold for the live experience but for every aspect of Amenra’s work, including the release of their sixth full-length. In the five years since they unleashed Mass V, the musicians experienced life in all its ambivalence, mourning deaths and personal tragedies as well as celebrating the birth of new life. They collected these experiences until each one of them felt the urge and necessity to work on new material to channel their feelings into – music that illustrates the duality of existence, the contrast between light and darkness and how both are connected.

But while facing and analysing the things that hurt you most seems like a painful process, Colin sees this way of self-exploration as a valuable lesson: “We’re all the same organic machines, we all have the same chemistry occurring in our brains. If you understand yourself, then you probably have more ability to understand others as well. So we analyse a lot, not only the things that hurt but also how they can make you stronger or wiser,” he explains.

Addressing these core emotions in an honest way without being afraid to show weakness creates a universality that speaks to people that apparently could not be more different – a fact that is impressively made clear as you walk through the foyer of Ancienne Belgique the night of the release show and look into the faces of fans from various walks of life, all united under the sign of the tripod.

“I know that some people are bonded who otherwise would not have been,” the singer agrees. “You have a 50-year-old bank accountant standing next to a full-body-tattooed, amputated dude and they’re all one in the moment. Honesty and daring to lower your guard and tell it how it is unites everybody. It proves that we’re all the same way deep inside.”

For the father of two sons, it makes absolute sense to translate invisible mental and emotional suffering into actual physical pain, for everyone to see. These live rituals like suspension or, more recently, having weighted hooks pierced through his skin are full of symbolic meaning, marking certain points in time, overcoming obstacles and physical limits while taking the idea of the ritual out of the religious context and putting it into the band’s own sacred one. “It’s good to speak with everything that you have,” Colin explains. “I don’t have an instrument to work with; my body and my vocal cords are my instruments. I try to use them in the most complete way.”

While the live ritual was a way of commemorating a new step in the evolution of Amenra, it was also a means of honouring his late father, whose death has been a chief influence on the musician’s work ever since the inception of Amenra, and drummer Bjorn Lebon’s mother, who died shortly before the band started recording Mass VI – just as the mother figure gained new importance in their output: “We all have strong characters as mothers who carried the whole families. Real clichéd mums: loving, strong women who fought hard for their babies. So for Mass VI, we wanted to get our mothers in the studio and interview them – talk about life, loss, love, motherhood and their sons – and incorporate that into the album.”

The band only had enough time to interview Paulette, Bjorn’s mother, and decided to postpone the idea. “When she died a couple of months later, we knew that that recording would move to another level. We keep that material in a safe place. I’m pretty sure that will be our clay to work with for years to come.”

And while this loss left its mark on all of the bandmembers, it also made them push their limits once more, as Colin explicates with regard to the live ritual: “I know I could handle six hooks in my back but I didn’t know if could handle 14 hooks, if I could handle hooks in my front. Before the show, we were all talking about that. Maybe after two hooks I would pass out, anything could happen. But I told Bjorn I would make it work, for his mum and my dad. So during the show I locked his eyes and we did it together,” he says, tears running down his cheeks. Because, for the band as well as the audience, an Amenra show is where all of the emotional weight unloads. It’s hard, it’s painful, but in the end you survive and come out stronger, maybe even with some sense of hope or closure. That’s what speaks to so many people, that’s what keeps the Belgians going.

“It is a clichéd thing for bands to say their music is cathartic or a form of therapy. But the repetitive nature of diving into the dark matter of existence is really like a therapy session,” Colin concludes. “It’s like channelling your energy in that moment, bundling all that shit there – and then you can focus on the light again until the next session.”

Mass Vi is out now via Neurot Recordings. Amenra tour the UK with Boris in February